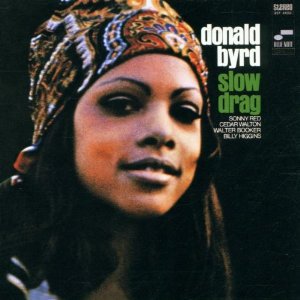 In 1967 trumpeter Donald Byrd was a busy guy, teaching or lecturing at no fewer than four universities. It's a wonder he had time to play, let alone record. Fortunately, he did find the time, and the resulting Slow Drag takes an honorable place in his catalog.

The album features Byrd's working unit, fresh off a stint at New York's Five Spot Café. It's a solid lineup that delivers with a dollop of bar smoke and dirty grooves. But it's also a sophisticated album: Byrd was a forward-looking musician, and the modal influence of other contemporary leaders, particularly trumpeter Miles Davis, can clearly be heard in songs like "Secret Love."

The perfectly named title track opens with a piano vamp that says more with three notes than some composers could say with an entire sonata. Those three notes have force and weight, and they set a sultry mood before the horns ever get a chance to blow the melody. Of course, when they do arrive they blast in over the vamp—loud enough to startle—before backing off the volume so as not to break the blue mood. Their entrance is very well executed. Byrd's solo is rich and warm, with enough vibrato to match the late-night vibe of the vamp, and altoist Sonny Red is simply a terrific blues player. An unusual addition to the track is the semi-mumbled scat conversation of drummer Billy Higgins. It's not always clear what he's saying, but he says it well.

There is one weak moment on the date. "Jelly Roll" is about as close as you could get to Lee Morgan's "Sidewinder" without paying royalties. It's played well enough, but it's a cheap song, no doubt included in an attempt to get the Hit Parade lightning to strike twice for Blue Note. On a record of solid compositions and top shelf playing it stands out as second rate.

Byrd saves his best playing for last on the beautifully delivered "My Ideal." With Higgins playing a brushed swirl, Byrd opens over a quiet bass line, playing with tender sensitivity. But the song adjusts abruptly when Red takes over with a much more aggressive approach, emphasized by Higgins switching to sticks. Finally, pianist Cedar Walton makes an elegant, light-handed statement before turning it back over to Byrd for the recapitulation. It's a wonderful arrangement.

Slow Drag is a healthy mix of soul, blues and bop that hangs together remarkably well, largely on the strength of its excellent performances. Donald Byrd had a singular voice on the trumpet, and this recording should not be overlooked in his anthology.