Don Drummond: The Genius and Tragedy of the World’s Greatest Trombonist

By DUNCAN HEINING
July 6, 2014
Sign in to view read count 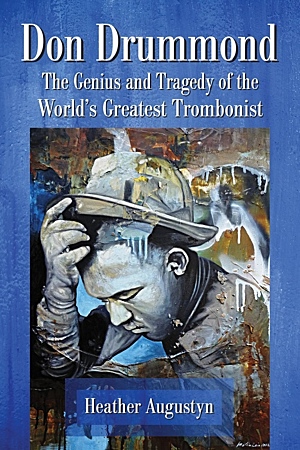 Don Drummond: The Genius and Tragedy of the World's Greatest Trombonist—Heather Augustyn's study of the late and extraordinarily gifted Jamaican trombonist, composer and ska pioneer is exceptionally well-researched and very readable. What impresses most about the work is the author's painstaking efforts not only to reconstruct Drummond's troubled life from the accounts of those who knew him but also that of Anita 'Margarita' Mahfood, the lover he stabbed to death in January 1965.

Briefly, Drummond graduated from that sterling Jamaican institution, the Alpha Boys School to become one of the finest and most influential musician Jamaica has ever produced. He was both a jazz and a ska musician—indeed, through Augustyn's careful analysis, ska emerges as a kind of 'folk-jazz,' as well as a precursor of reggae. In this respect, Drummond and fellow members of the legendary Skatalites created a musical synthesis that drew on Latin-American, African and American sources filtering these through a musical sensibility rooted in improvisation.

A veteran of numerous sessions—the book benefits from an exhaustive discography by Michael Turner—for Coxsone, Duke Reid and Prince Buster, Drummond's finest work was to be found on tracks like the Skatalites "Eastern Standard Time" or on his own solo recordings such as "The Man is Back." At its best, Don Drummond reads like a chronicle of a death foretold, though not of course quite in the league of Marquez' masterpiece. We are from the outset aware that this story will end in tragedy but the journey on which Augustyn takes us is just as important as its tragic endpoint. She allows us to see the music that Drummond and others created against a well-articulated picture of a class-ridden society unable to shake off its sad imperial heritage. We see its personalities as real, fully-fledged individuals. And yet, Augustyn paints these characters without romanticising them. Most importantly, she avoids turning Drummond's—and Anita's—sad story into myth.

In this last respect, her attempts to understand and explain Drummond's mental health problems are unusually insightful. It is rare for authors without some professional experience in this area to offer such a coherent and sympathetic account of mental illness. More than that, she locates this effectively within a context of treatments available in the underdeveloped health economy of this small Caribbean island.

There are a couple of points with which I would take issue. Augustyn makes much of the baleful influence of British imperialism on Jamaica, as indeed on its other non-white Dominions. This is a fair comment. At the same time, however, this seemed to stem more from a liberal American, almost moral standpoint rather than one located in a more radical understanding of the nature of imperialism and hegemony, now predominantly North American, in a post-colonial world. The other issue concerns her comparison of the collapse of the West Indies Federation that Britain had pressed Jamaican and its other Caribbean satellites to join with the recent Euro crisis in the European Union. I will not labour the point further. Put simply, the two are not comparable and arose in completely different political, economic and cultural circumstances.

These remarks aside, Heather Augustyn's Don Drummond is an impressive piece of biographical writing. Perhaps the most telling question to ask of any musical biography is whether it makes the reader want to discover or rediscover the subject's musical achievements. In the case of Don Drummond: The Genius and Tragedy of the World's Greatest Trombonist, the answer to that question is an emphatic 'Yes.'