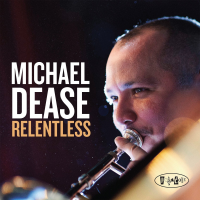 While rising star trombonist Michael Dease's previous albums have all been small group affairs, much of his sideman work has marked him as something of a large ensemble specialist. He's put his slide to good use in numerous big bands and jazz orchestras, including those led by Christian McBride, Charles Tolliver, Roy Hargrove, Rufus Reid, and Nicholas Payton. Given that information, it should come as no great surprise that Dease decided to make a go of fronting his own big band.

Relentless—the rising star trombonist's sixth album, and his first on the Posi-Tone imprint—finds Dease in charge of a group that's populated with other big band mainstays (trumpeters Seneca Black and Greg Gisbert), young jazz heavies (bassist Linda May Han Oh, drummer Ulysses Owens, Jr., saxophonist Sharel Cassity), and a few welcome guests (trombonist Wycliffe Gordon and guitarist Andrew Swift). The program reads like a history of Dease's commissions and musical upbringing. He reclaims arrangements originally penned for Hargrove's group (Duke Pearson's "Is That So"), the WDR Big Band (Eric Alexander's "Little Lucas"), and the Webster Groves High School Big Band ("Webster Grooves"); he expands music previously recorded in a small group setting ("Relentless") and looks back on his early attempts at writing for big band ("The Takeover"); and he reshapes classics that he's learned to love over the years ("Two Bass Hit," I'm Glad There Is You," and "Autumn Leaves").

Dease's charts kick, swing, leave lots of room for soloists, and occasionally put each section to the test with fiery, finger-busting passages. It's not all high energy, adrenaline-fueled music, but the most memorable performances—"The Takeover," "Roppongi," and "Two Bass Hit"—tend to get the pulse racing in some way.

Groups like this tend to be studio-made bands, not working units, so it'll be interesting to see if Dease can get this group on the bandstand and develop what he's started. It's a unit with plenty of muscle, driven by a leader with boundless talent, so here's to hoping that Dease can keep it afloat and help it evolve.

Is That So; Force; Relentless; I'm Glad There Is You; The Takeover; Little Lucas; Roppongi; Two Bass Hit; Webster Grooves; Autumn Leaves.