Maximize your visibility at All About Jazz by upgrading your musician page from standard to premium. With it, you'll receive All About Jazz home page exposure, a highly stylized / ad-free musician page with bonus features and benefits, an ad, plus you control where you sell your music and so much more.
Learn More
387 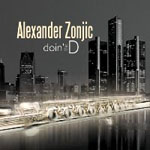 Along comes Alexander Zonjic with flute in hand and big bouquet of roses for a town that's often the butt of bad jokes. Zonjic says Detroit is "the greatest music city in the world" and Doin' the D is a love letter to his adopted city.

Zonjic, a Canadian by birth and citizenship, owns Seldom Blues, a night club in the city, and hosts a local morning show on a smooth jazz radio station, so he's not kidding around about his commitment to Detroit. He calls in the reinforcements for Doin' the D and gets by with a lot of help from his friends, including Jeff Lorber, Bob James, Rick Braun, Ken Navarro and the genre's reigning king, Kenny G

Astute listeners may bolt upright in their recliners when they realize Zonjic and Kenny G. are tackling Freddie Hubbard's classic "Little Sunflower," but the G-man resists the urge to noodle and instead contributes some nicely restrained soprano sax, and his interplay with Zonjic's lilting flute comes off as an unexpected, but pleasant surprise. Chieli Minucci, of Special EFX, brings a Spanish guitar riff to "Passion Island" and, accompanied by Zonjic's frequent guests The Motorcity Horns, they really get funky with it.

Zonjic plays well with others. That is both a strength and a (slight) weakness of Doin' the D. The flute is not the fieriest of instruments and Zonjic never unleashes wild flights of fancy with his instrument. His flute is often out in front, but at times Zonjic recedes into the background. On "Tourista," featuring trumpeter Rick Braun, and The Guess Who oldie "Undun," with vocalist Maysa Leak, Zonjic politely defers to his guests to the point where he nearly seems to be accompanying them rather than the other way around.

Ken Navarro's production and playing on the title track is excellent and gives Zonjic a showcase where he asserts himself and plays with unleashed, unabashed exuberance. If the Detroit Chamber of Commerce is ever looking for a theme song for a commercial they could do far worse than this.

Zonjic's Doin' the D is a likeable and easily enjoyable album from an artist and entrepreneur who has access to smooth jazz's major players, making this a disc that will be popular for some time to come.

Top Down; From A to Z, Little Sunflower; Passion Island; Tourista, Undun; Doin