Top charting & award winning contemporary jazz guitarist and composer Ken Navarro is recognized as one of today's leading musicians. His impressive discography of 19 top charting albums showcase his appeal to a wide range of listeners with inspiring compositions and superb guitar performances.

This is Ken's 19th CD release and is the follow up to his breakthrough release of 2008, The Grace of Summer Light which was named the #1 Contemporary Jazz CD of 2008 by Jazz Times magazine.

Navarro's 2007 CD "The Meeting Place" and his 2005 release "Love Coloured Soul" were in the National Jazz Charts for 62 weeks, reaching #6 in Radio & Records national smooth jazz airplay chart in November of 2005. Love Coloured Soul marked Ken’s return to his own record label, Positive Music Records. Ken’s 2003 release All The Way, and his 2002 CD Slow Dance spawned numerous radio hits including “Bringing Down The House”, “In The Sky Today”, “So Fine” and “Healing Hands”. Ken’s 2000 CD release Island Life scored two hits at smooth jazz radio including "Delicioso," as well as the title track keeping the CD on the airwaves for a solid 52 weeks! 1999's In My Wildest Dreams continues to be one of Ken's top sellers and 1998's live CD & Video Ablaze in Orlando has been acclaimed as one of the best live jazz CDs of the decade. Smooth Sensation, released in 1997, was in the Top 10 of Radio & Records' Smooth Jazz chart for 12 weeks, helping to make the CD the #17 Smooth Jazz album of 1997! Other recent releases from Ken Navarro include his 1996 album, When Night Calls, featuring Eric Marienthal on saxophone, and Christmas Cheer, a holiday album of contemporary jazz guitar and acoustic piano duets.

Ken's 1995 album, Brighter Days, was voted the #9 album of the year by Smooth Jazz radio. Brighter Days heralded a bold step forward for Ken, bringing to the forefront the strong R&B elements that have always been a part of his music, and enlisting a powerhouse of support from featured solo artists including former Rippingtons sax man Brandon Fields. Brighter Days reached the national radio top 5 and held a position in the top 20 for six months in 1995. His 1991 release, After Dark, was selected for screening by the 1991 GRAMMY nominating committee. His successive albums, The Labor of Love (1992), I Can't Complain (1993), and Pride and Joy (1994), all reached the top 5 in national radio, firmly establishing Ken Navarro as a mainstay on Smooth Jazz radio play lists.

Ken began his recording career in Los Angeles as a premier session guitarist, performer and composer, performing and recording with artists as diverse as Doc Severinsen, Nell Carter, John Patitucci, Eric Gale, Vicki Carr, Dave Koz, Ann Jillian and Alex Acuna. In 1990, Ken established his own musical identity with the release of his debut album, The River Flows. With each successive album, Ken has received increasing acclaim and recognition as a leading stylist in Contemporary Jazz. His music is distributed throughout the world from Japan to Singapore, Hong Kong, Thailand, Britain, Australia, Chile, Brazil, Italy, Spain, France, Germany, the Netherlands and even in China. Customized greatest hit collections were recently released in Singapore and Japan.

Ken Navarro Makes It Possible to Listen to His New CD in Its Entirety... 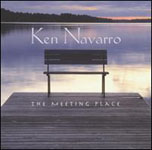 In My Wildest Dreams

The Labor Of Love

All About Jazz musician pages are maintained by musicians, publicists and trusted members like you. Interested? Tell us why you would like to improve the Ken Navarro musician page.