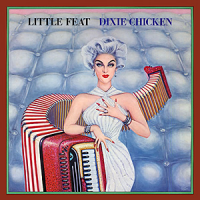 A lot has been written about Dixie Chicken over the last few decades, so there's perhaps not all that much more this listener can add to the discussion. Yes, it has another great album cover by the late Neon Parks, a painter whose name has become synonymous with the band itself. And yes, the LP found Little Feat at a creative peak, pulling off a collection of songs that are as good if not superior to anything they had done before, or have released since. Also, Lowell George's voice never sounded better, whose vocals were an ideal fit for the Southern blues/funk oozing from every song.

The New Orleans swamp rock of the title cut contains one of Lowell's finest ever performances. Both Bill Payne and Richie Haywood play their respective keyboard and drums with style and precision, so much so that if a song could be rolled and smoked then this would be one of them. Next is Lowell's classic "Two Trains," a laid-back funk-rock number that is more sophisticated than it seems. The exquisite "Roll Um Easy," features Danny Hutton from Three Dog Night contributing harmony vocal. Hutton described how it happened: "I just came back from touring, and my voice was really kind of burned out. Lowell was in the studio all by himself, and he said "C'mon man, let's try a harmony." And that was it, one take. I sound like a rough old man on that track." And doesn't he just at that.

Allen Toussaint's "On Your Way Down" gets a stylish makeover, while "Kiss It Off," written by Lowell, is a mainly synthesiser dominated tune, with a sound that is reminiscent of Gene Clarke's No Other LP from a year or so later.

Side two opens with a cover of Fred Tackett's "Fool Yourself," and what a wonderful interpretation it is too (Tackett would become a member of the '80's incarnation of the group). As always Lowell's vocals are soft and soulful, and right in the pocket. The shambling "Walkin' All Night," by Paul Barrére and Bill Payne, is a blues-based jam, with plenty of slide guitar and congas. "Fat Man in the Bathtub" is another one of those swamp-funk compositions Feat seemed to so effortlessly excel at. The lyrics are also some of George's most humorous. "Juliette" is an unexpected highlight, full of warm, shimmering production, before the LP concludes not with a bang but a refined whimper on "Lafayette Railroad," a lusciously relaxed instrumental, with Lowell's slide guitar telling a story as only he could tell.

Despite the album's musical merits, which are considerable, for reasons unknown to modern civilisation, it fell short of reaching out to the wider public, or to be more exact, the wider public failed to reach out to it.

Dixie Chicken is an impeccable record from beginning to end. Why it has never been given the deluxe CD treatment it so richly deserves remains a mystery. Oh well, I guess we'll just have to wait another forty years.

Dixie Chicken; Two Trains; Roll Um Easy; On Your Way Down; Kiss It Off; Fool Yourself; Walkin All Night; Fat Man in the Bathtub; Juliette; Lafayette Railroad.