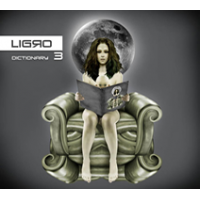 Ligro is yet another one of MoonJune Records' stellar discoveries from Indonesia. One says "Indonesia" with caution, as each member of this supremely energetic fusion power trio hails from a culturally different part the vast region: bassist, occasional pianist, and chief composer Adi Darmawan is from Madura, drummer Gusti Hendy is from South Kalimantan and guitarist Agam Hamzah's heritage is a mix of Aceh and West Java. Their third album and second international release, Dictionary 3, has a refreshingly raw, unbridled sound. Referring, at different junctures, to the dark malevolence of King Crimson circa Red (Atlantic Records, 1974), the cross cultural fusions of John McLaughlin's Mahavishnu Orchestra, and to the diverse traditional musics of their culturally variegated homeland, Dictionary 3 is risky, rough-hewn, and inventive. More than many others who've chosen to revisit jazz-rock or fusion or whatever it's called in the 21st Century, Ligro have captured what was exciting about this music in the first place: relentless energy, seat-of-the-pants experimentation, and an implacably transgressive, iconoclastic attitude towards musical genres.

Hendy, who collaborates with Dewa Budjana in the Indonesian pop band Gigi, has crafted a drum-kit that is a physical manifestation of Ligro's musical worldview. It's a concatenation of Western elements (snare, hi-hats), Westernized "exotic" instruments (China cymbals, gongs), and an array of drums from various regions of Indonesia and Java, used primarily as toms. Though the ethnic drums lack the resonance of Western toms, suffering a bit when pitted against cymbals, they add more than just ethnic flavor to Ligro's music. In a very real sense, Hendy's hybrid drum-kit is completely inscrutable to ears not attuned to the multitude of cultures referenced on Dictionary 3. I certainly can't claim to understand any of the ethnic stuff going on here. Fortunately, it's easy to simply sit back and enjoy!

Unlike label-mates Budjana and Tohpati, who've released a string of excellent albums of high-gloss fusion featuring well- known ringers such as Vinnie Colaiuta and Jimmy Haslip, Ligro have chosen to remain a cohesive, self-contained unit (a guest shot by teenage keyboard whiz Ade Irawan notwithstanding). And Dictionary 3 is, for the most part, completely unlike the work of their label mates. Their music can be incredibly dark, and a lot of it seems completely spontaneous. Hamzah's guitar solo in "Pentagonal Krisis" is one of the most violent you'll hear outside of some sort of metal or doom / sludge setting. Though the piece begins as a moody minor-key meditation with strong ethnic flavors, by the 10-minute mark Hamzah has gone completely batshit crazy, feedback frothing at the mouth, high velocity lines buzzing with so much distortion that he evokes John Coltrane's "sheets of sound." Darmawan's bass playing is no less remarkable: his ringing tone, impeccable technique and spot-on timing are as virtuosic as Hamzah's guitar work.

The rest of the album is no less engaging. "Bliker 4," with keyboardist Ade Irawan, is a melodious, high-energy romp that comes close to the sort of fusion music that Tohpati, Budjana and Dwiki Dharmawan are working with. The simple theme of "Tragic Hero," while a bit of a throwaway, sets the stage for a remarkably interactive and cogent trio conversation. Inspired by, and partly based on, Olivier Messiaen's "Quartet for the End of Time" and Anton VonWebern's "Opus 28," the intensely visceral energy of "20th Century Collaseu" will again invite comparisons to Bill Bruford-era King Crimson. "Lonely Planet" finds the trio delving quietly into the blues and the music of their native lands only to detour, deliciously, into more of that thorny metallic prog-rock- fusion thing they do so well.