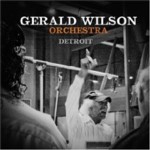 Commissioned by the Detroit International Jazz Festival and premiered on the occasion of the composer's 91st birthday, Gerald Wilson's six-movement "Detroit Suite" demonstrates that after nearly seven decades in the music business, the nonagenarian composer and arranger still has a great deal to offer in terms of musical creativity. Wilson spent the latter part of his teen years in the Motor City, where he studied trumpet, piano, percussion, and composition at Cass Technical High School from 1934-39, and he still regards Detroit as a "hometown."

The opening "Blues on Belle Isle," which is named for a park on a island in the Detroit River, features the alto sax of Randall Willis, trumpeter Sean Jones, violinist Yvette Devereaux (following in the footsteps of the young Jean-Luc Ponty, who occupied this chair in the Wilson ensemble four decades ago), and guitarist and Gerald's son Anthony Wilson, who has been a mainstay of the Diana Krall quartet for the past several years. "Cass Tech," Wilson's paean to his alma mater, is a variation on Benny Golson's "Along Came Betty" in much the same fashion as Bill Holman's take on "Stompin' at the Savoy" for Stan Kenton over a half-century ago. The ballad "Detroit" spotlights Willis on flute, Jones on fluegelhorn, and the tenor sax of Kamasi Washington (Jones and Washington appear on both the Los Angeles and New York sessions).

Based on the chord changes of Billy Strayhorn's "Chelsea Bridge," "Miss Gretchen" salutes Mack Avenue founder and president Gretchen Valade with solos from pianist Brian O'Rourke and the Harmon-muted trumpet of Winston Byrd, plus Devereaux (adapting the classic Ben Webster solo from the release to her violin) and Anthony Wilson. Latin rhythms a la Wilson's "Carlos" and "Viva Tirado" predominate in "Before Motown" (which bears absolutely no connection with the musical genre of that name), with Bobby Rodriguez's trumpet, Les Benedict's trombone, and the tenors of Washington and Louis Van Taylor all capturing attention. "The Detroit River," on the other hand, resembles Count Basie on steroids, as trumpeter/contractor Ron Barrows, veteran soprano saxophonist Jackie Kelso, trombonist Eric Jorgensen, Devereaux, Van Taylor, O'Rourke, and Anthony Wilson all contribute to this hyper-charged swinger.

The two remaining tracks, "Everywhere" (a remake of the title cut from a 1968 Pacific Jazz LP by Wilson) and "Aram," are from the same sessions as Wilson's 2005 New York, New Sound (his Mack Avenue debut) and feature the New York ensemble. Flute legend Hubert Laws highlights the modal "Everywhere," while "Aram" (possibly named for the Soviet-era Armenian composer Aram Khachaturian) offers frequent rhythmic shifts between jazz-waltz and straight-ahead 4/4 tempi supporting powerful solos by trumpeter Terell Stafford (Director of Jazz Studies of the Boyer College of Music at Philadelphia's Temple University, and a member of NYC's celebrated Vanguard Jazz Orchestra) and altoist Antonio Hart.