BY BRUCE LINDSAY
November 28, 2009
Sign in to view read count 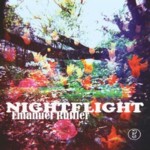 Emanuel Ruffler keeps extremely talented company on Nightflight, the first album as leader for this German-born pianist who is now based in New York. The 11 self-penned tunes are characterized by an apparent simplicity and a propulsive rhythm, creating an immediately appealing recording.

Despite his role as leader and composer Ruffler is a relatively low key presence on the album. His piano playing has style but he is well aware of the talents of his band members and gives them plenty of opportunity to shine. Gene Jackson is an emphatic presence—the drummer is hugely talented and his powerhouse playing drives almost every one of these compositions. Jackson and percussionist Kahlil Kwame Bell create irresistible beats across the album's tunes. The horn section has a pleasantly soft edge to its playing, which acts as a counterpoint to the harder, brighter, feel of Jackson and Bell's work. Tenor saxophonist John Ellis, who plays on four tunes, is especially noteworthy on "Something for my Wedding."

Opening tune "Cheerful" kicks off the album by being exactly what it says—it's a bright, percussion-led, tune with a Latin feel that features a confident solo from Ruffler. "Pretty" is actually extremely pretty—a delightful tune that seems destined to become a movie theme. The band eases back for this composition, enabling Ruffler's delicate piano to come to the fore over a simple theme played by the horns. Closing tune "The Metropolis" finds the bass of Nic Thys acting as the core of the tune, enabling Jackson and Bell to create some complex rhythm patterns over which the horns, minus saxophones, play with a brighter than usual sound.

Overall Nightflight is an atmospheric album. Ruffler has composed a set of tunes that have an almost cinematic quality to them and the talented musicians bring them to life admirably—based on this debut, Ruffler's future development looks highly promising.