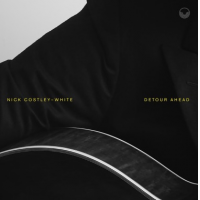 Nick Costley-White has appeared on a couple of significant albums recently; Henry Spencer's The Reasons Don't Change (Whirlwind, 2017) and Snowpoet's Thought You Knew (Edition, 2018). Graduating from London's Guildhall School of Music and Drama in 2011 with first class honours and a Yamaha Jazz Scholarship prize for Outstanding Musicians, Detour Ahead is his long-anticipated debut album.

Costley-White's guitar style is archtop-typically warm toned but he can swing with the best of them, as heard on the timeless opener, Cole Porter's "Just One Of Those Things" and the catchy "Swing State." Herb Ellis's languid title track remains faithful to the original with the guitarist accompanied by bass and drums only. Some more deft fingerpicking introduces "Thinky Pain" (an allusion to comedian Marc Maron and one of six Costley-White originals on the album) and here, as on "The Kernel," the quartet is augmented by Sam Rapley on bass clarinet, adding tonal colour and harmonic depth.

The set's closing number "My Number One" is at odds with the preceding, mostly laid-back tracks, where Matt Robinson swaps acoustic piano for Rhodes and Costley-White adopts a sharper electric edge to this fusion-tinged piece. Detour Ahead is a strong first album populated by finely executed numbers and Costley-White proves both his virtuosity and ability to write subtle and engaging tunes. But importantly, the album clearly signals a promise of even greater things to come.

Just One Of Those Things; Loads Of Bar Blues; Swing State; Detour Ahead; Thinky Pain; The Kernel; Bridges; My Number One.