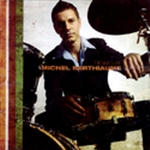 Michel Berthiaume is clearly one of the most classically-molded percussionists around. Drummers are supposed to keep time, to find the pulse of the song, and create the rhythmic content of composed and improvised pieces. Inspired percussionists feel, hear, and play melodies. The truly inspired ones can even provide harmonic lift to music from the skins they brush and call to life and the cymbals they tickle and clash. Berthiaume is one of those musicians and he provides a fine display of his abilities on Departure, for XXI-21 a Montreal-based label. As a composer he is also willing to take chances with time signatures and being a percussionist of course helps enormously.

Berthiaume is a very active participant in the music scene in Montreal and appears to be favored by instrumentalists—especially trombone players—and vocalists as well. This says a great deal about his ability to be a lead voice and a sensitive accompanist. And the fact that he is a wonderful bedfellow of the trombone, which is an instrument close to the human voice, speaks volumes with an ability to converse musically with deep expression, subtle inflection, and sometimes as the "other" singing voice in the harmony of the song. This is heard throughout Departure, but especially on "Stupide et Chanceux" and "Perfect Solitude." The first of these tracks describes the naiveté of youth and employs very subtle shifts in rhythmic coloration that is beautifully executed—first with superb introduction and then with gentle changes in tempo up and down the choruses. On the second track the drummer plays in 7/4 rhythm, but it is the clever shading and timbre of his playing that is so attractive.

Another striking aspect of this album is the relationship between the instruments. It is rather rare to find piano and guitar both exchanging somewhat prominent roles in music. But here, there's no clash or argumentative chatter in the rhythm section of the ensemble. In fact, pianist Josh Rager and guitarist Kenny Bibace appear to find room to breathe and express themselves with wonderful dynamics adding more color to enrich the music. On "Departure" this is fresh and expansive, and with the light and sonorous aspect of an electric piano, the brightness is considerable when the two get together on "Complementary."

But the most striking relationship is between brass and percussion. It seems that Bill Mahar and Berthiaume can read each others' mind and emotions; tiptoeing and dancing around in a sanguine manner. It truly feels like the music sings in harmony, with Mahar's trumpet or flugelhorn leading Berthiaume's varied and colorful percussion down melodic paths. "Bic Forest" and "Complementary" are two extraordinary examples of this—the latter takes a superb turn when Sage Reynolds joins in on bass.

Taken as a whole, Departure marks a strong debut by Berthiaume.