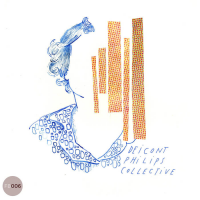 Mike DeiCont and Allison Philips are the kind of players who don't want to just give you something unusual to listen to, but hopefully take you on a trip as well. It's unclear exactly where—probably to them as well as you—since the results are in territory so abstract it's off the map. Sometimes it's not even about where they're going so much as the games they can play and noise they can make in getting there.

The duo's debut EP starts in the desert with what sounds like a brief homage to Tinariwen . Soon, though, the dusty guitar motif abruptly disappears and it's suddenly a nearly silent interlude before some dirge-tempo percussion and floating trumpet turn the track into an odd experimental bluesy hash. Lead lines continually take turns with drifting solos and whisper-quiet drones. There are two percussionists at work backing up the duo, whose thuds and clatters lock together in step rather than competing or overpowering each other (even when things break down into noise).

Philips often squeezes her horn to some wild Bitches Brew wails, though she's not averse to the odd whisper-soft interlude when the EP's strange shape calls for it. Louis Cohen's over-juiced guitar is equally likely to back her up with skewed counterpoint lines or loud pitch-bent twangs. DeiCont is impressively non-prominent for a co-leader; his bass is a disquieting low-end presence that doesn't need to muscle its way up front to be heard, though it contributes to the noisy freakouts as much as anything.

It's hard to know quite what to make of music like this—which may probably be beside the point. The abrasively compelling sound speaks (and yells and groans) for itself. It often drifts loosely enough to sound improvised, though there are enough unison rhythms and change cues to show the deliberation behind it all. Weirdly dreamlike as the overall shape is, this collective is willing to bring it to life and follow where it leads. The mental pictures it gives each different listener will no doubt be unique as well.

September No. 1; CPFGHTR; Louder Together; Spinning Box; Sad to Be Meeting You.