BY TROY COLLINS
August 7, 2009
Sign in to view read count 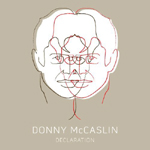 Renowned for his Olympian tenor solos, McCaslin's facile interpretive abilities were honed under the tutelage of George Garzone and Billy Pierce at Berklee, and documented as a sideman in the company of such luminaries as David Binney, Dave Douglas, Danilo Pérez and Maria Schneider. McCaslin comes into his own as a composer on this panoramic session, which highlights his creative virtuosity as soloist and writer in a variety of settings.

New to this longstanding core line-up, Simon proves as valuable a foil for McCaslin as Monder. Restrained and economical, Simon delivers billowy narrative soliloquies on "M" and "2nd Hour," offering serene contrast to the leader's fervid cadences. Whether amplifying McCaslin's muscular phrasing with scorching fretwork on the appropriately titled "Rock Me," or unveiling gossamer filigrees on the lush ballad "Jeanina," Monder's chameleonic versatility is peerless.

Embracing a wealth of genres and styles, the anthem-like opener "M" showcases the leader's pneumatic tenor, while "Fat Cat" demonstrates McCaslin and Simon's expertise navigating percolating Latin rhythms. The opulent harmonies of "Jeanina" and the plaintive Americana of the title track are the inverse of "Uppercut" and "2nd Hour"—labyrinthine post-bop excursions fraught with oblique angles and ingenious arrangements. Indicative of their titles, "Rock Me" is an electrified rave-up, with "Late Night Gospel" one of McCaslin's most compelling tunes—an ascending blues meditation featuring Simon and Monder's silver-toned lyricism buoyed by soulful brass accompaniment.

Considered one of the reigning mainstream tenor stylists of the post-Michael Brecker generation, Declaration is a bold new step for McCaslin, proving his abilities as a developing composer and arranger of note and opening new vistas on an already promising career.