By Jakob Baekgaard
November 3, 2009
Sign in to view read count 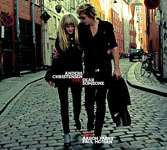 Throughout the years, Danish jazz has been blessed with a host of talented bassists such as Bo Stief, Jesper Lundgaard and Jesper Bodilsen, but one name, in particular, has reached across the country's borders and become synonymous with virtuosity and melodic invention. The late Niels-Henning Orsted Pedersen was most famous, perhaps, for playing with Oscar Peterson and Ed Thigpen in what has to be one of the legendary pianist's most successful formations. The shadow of the great Dane has, however, loomed largely over the aesthetic landscape of Danish jazz and no one has really been able to take his place in terms of stylistic innovation—until now.

If anything, the 2009 Copenhagen Jazz Festival proved that a shift in paradigm has taken place in Danish jazz. This change in aesthetic can, in many ways, be seen as embodied in the playing of the young bassist Anders Christensen. Whereas the strength of Ørsted Pedersen was his lightning fast figures and impeccably tight swing, Christensen makes a virtue out of playing slower and with fewer notes. Unlike Ørsted Pedersen, he doesn't fill the empty space; he plays around it, giving his sound a loose, almost floating feeling that still manages to groove.

The reference to tradition is also different. If Ørsted Pedersen was a traditionalist whose pillars were Danish folksong and the standards, Christensen is much more eclectic in his choice of repertoire. This is evident on his long-awaited debut, Dear Someone, which finds him enlisting iconoclastic drummer Paul Motian and one of the most talked-about pianists of the moment, Aaron Parks.

The cover, with its allusion to iconic singer/songwriter Bob Dylan's The Freewheelin' Bob Dylan (Columbia, 1963), speaks clearly of the post-modern nature of an album whose title track isn't a standard but a country-waltz by folksinger Gillian Welch. But Christensen doesn't shun classics; in fact, the trio plays a pretty, swinging version of "Stompin' at the Savoy."

The highlights of the album are three Motian compositions: "Split Decision," "Arabesque" and "Once Around the Park" which all display the drummer's uncanny knack for combining abstract swing and impressionistic lyricism. Parks, like Christensen, is an eminent interpreter of Motian's music, and his reading of "Arabesque" is one of the most beautiful versions of this melancholy ballad committed to record.

There is a variety of genres and moods on Dear Someone, and Christensen gently guides his trio through them all. More than anything, his talent lies in the way he elegantly puts himself aside and lets the musical voices of the past and present speak in a musical language of joy and sorrow.

Dear Someone; Split Decision; Arabesque; Conception; Spend All The Money; Once Around The Park; Stompin At The Savoy; The Wedding; I'll Be Seeing You; Little One.