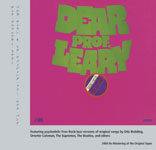 Any album combining '60s hits like "Ode to Billie Joe" and "Respect" with Ornette Coleman's "Lonely Woman" deserves more than a passing glance. The late French saxophonist Barney Wilen was already thirty-one when he recorded Dear Prof. Leary with His Amazing Free Rock Band in 1968 for the German MPS label. Best-known by then (and, likely, afterwards as well) as Miles Davis' saxophonist on the trumpeter's noir-esque soundtrack to director Louis Malle's Ascenseur pour L'échafaud (1958), Promising Music's reissue of Dear Prof. Leary presents another side to the largely forgotten Wilen.

Wilen recruited a sextet of players known and unknown, including a very young Joachim Kühn (piano, organ), who'd ultimately become an MPS mainstay, and drummer Aldo Romano, here heard together with the more rock-informed Wolfgang Paap (drums). The group is rounded out by two artists who will be, at best, footnotes in jazz history: guitarist Mimi Lorenzini and bassist Günter Lenz, who'd appear on a handful of MPS releases and, a few years later, the Berlin Contemporary Jazz Orchestra (ECM, 1990).

While many of MPS' releases feel timeless, Dear Prof. Leary is definitely of its time—a combination of outrageously near-psychedelic free jazz with a rock attitude. Drugs may or may not have been a part of the equation, but in the unusual breakdown during Kühn's high energy title track, where both the keyboardist (on organ) and saxophonist are wailing madly, the tune dissolves completely into a series of guttural noises and primal screams that may or may not allude to some seriously bad tripping. A rocking coda leads nicely into an initially reverent but ultimately free-wheeling, eight-minute take on Bobbie Gentry's "Ode to Billie Joe," featuring an unexpectedly soulful organ solo from Kühn that retains the high velocity extremes that would be his signature by the time of Association P.C.'s 1974 release, Mama Kuku (Promising Music/MPS, 2008), and violinist Zbigniew Seifert's classic Man of the Light (MPS, 1976).

As rock-heavy as the grooves are, the soloing is as loose and unfettered as the time in which it was made. Lorenzini's riff-based "Dur Dur Dur" is simply an opportunity for some angular wails from Wilen, raucous wah wah from the guitarist and soul jazz lines from Kühn, while the twin-drum approach on "You Keep Me Hanging On" creates a turbulent underpinning for some psychedelic in tandem soloing by Wilen and Kühn, this time on piano. Lorenzini and Lenz keep the groove and changes clearly defined until another dissolve into complete freedom that ultimately resolves back to the familiar refrain before ending, once again, in chaos.

Electric and acoustic textures mix throughout the album, but nowhere are they more paradoxically opposed yet integrated as on "Lonely Woman," where Lenz's arco bass and Kühn's exploratory piano mesh with Wilen's lyrical yet liberated soprano. It's a combination that makes Dear Prof. Leary less of a masterpiece than some of Promising Music's reissues, but remains an intriguing curiosity of its time that's certainly worth revisiting.

The Fool on the Hill; Dear Prof. Leary; Ode to Billie Joe; Dur Dur Dur; Why Do You Keep Me Hanging On; Lonely Woman; Respect.