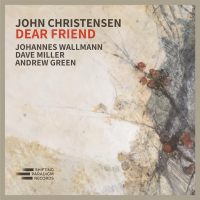 Madison Wisconsin based bassist/composer John Christensen begins his debut, Dear Friend with the namesake track, a quietly rolling, reflective impression that might at first remind one of a backing track for any number of 70's singer-songwriters. It's a pretty piece, a wonderful starting point for a very melodic, almost nostalgic listen.

The next composition, "Something Said in Passing" keeps the nostalgic vibe, as guitarist Dave Miller recreates any number of 60's pop sounding guitar punctuations, giving way to a lush and vivid turn from pianist Johannes Wallmann and contrapuntal hijinks with Christensen. "Hay-De-HoeDown" breaks the mellow mode as drummer Andrew Green takes his spotlight and the band gels around him for a rhythmic dance featuring more fine soloing from Christensen.

Like an hallucinatory outake from any number of David Lynch/Angelo Badalamenti film scores, "Slate Icicles on Trees" glistens meditatively. Christensen clearly demonstrates he's not a cautious composer, moving willfully to the waltzing "Prairie Grass Suite" which gives Miller plenty of space to weave his big sky spell, and for Wallmann to set the tone. Dear Friend may not be the rocket debut that jettisons its players into the upper ranks right off, but it is a most enjoyable, positive, and best of all promising, listen.