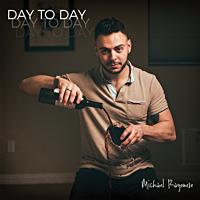 If you haven't heard Michael Ragonese's name before, you're sure to hear it a lot more. The award winning pianist is a constant fixture in Los Angeles; if he's not a sideman at one club, he's leading a band at another. Among the many luminaries he has performed or recorded with are: Bennie Maupin, David Binney, Engelbert Humperdinck, Alphonso Johnson and Dave Koz, whose newest album will feature Ragonese. His busy performance schedule hasn't kept him from writing and perfecting his own music, though, and years of playing and practice have come to fruition in his beautiful debut album, Day to Day.

Produced by L.A.'s Josh Nelson, Day to Day features Walter Smith III and young phenom Shai Golan on saxophones along with Luca Alemanno on bass and Anthony Fung on drums, both alumni of the prestigious Thelonious Monk Institute of Jazz Performance.

Ragonese's writing is best described as adventurous and exciting while remaining lyrical and and approachable. The many hours he has spent playing standards are evident, as is his love of modern players and composers. Tunes like "Jolly Rancher," bring to mind Aaron Parks while "Day to Day" would be right at home on one of Ben Wendel's records.

The album has no shortage of contrast and ranges from up-tempo vehicles for showcasing soloists, as on "Copycat," which features a short but powerful solo from Fung, whose accompaniment throughout the record warrants an repeated listen-throughs, to more introspective pieces like "Day to Day." The title track paints an evocative narrative arc with its melody and opens up into one of Ragonese's most compelling solos. Similarly, the colorful harmony on "Jolly Rancher" provides Smith a broad palette to improvise with, and he makes brilliant use of it, while the mixing and production glue the ensemble into a moody whole.

Other highlights include "Ceiling Fan," with its multilayered melody, and rhythmic complexity and "Dreams of Capri," which features a masterful solo from Alemanno. The album encourages several listens.