By John Eyles
May 24, 2019
Sign in to view read count
Iluso Records was formed in 2013 by the Australian drummer Mike Caratti and the Madrid-born, New York-based guitarist Alvaro Domene, the two having met and become close friends in 2007 when they were both studying on the jazz course at Middlesex University, London, and maintained contact after they left London in 2011. They initially formed the label to release a CD by Gran Masa, a quartet which they had put together with two Spanish musicians. In its early days, Iluso mainly issued recordings featuring one or other of the founders but gradually, alongside such releases, they began issuing other musicians' work too. The label is quite selective about its releases and averages about four a year. As its three latest albums suggest, the music Iluso issues is drawn from all over the world... Terry Day, Dominic Lash, Alex Ward
Midnight and Below
Iluso
2019 Given that Caratti and Domene both spent several years in London while at Middlesex Uni, it is not surprising that a significant number of Iluso releases originate there. Notable examples include the star-studded 2017 releases Extremophile by the Dominic Lash Quartet, Hesitantly Pleasant from saxophonist Rachel Musson with Steve Beresford on piano and Caratti himself on drums, and Into Darkness by the quartet Stray, consisting of saxophonist John Butcher, John Russell on electric guitar, Lash on bass and Ståle Liavik Solberg on drums. Midnight and Below was studio-recorded in London in November 2015 and (unsurprisingly) features Lash on bass plus two other stalwarts of London improv, Terry Day on drums and Alex Ward alternating between guitar and clarinet. The five pieces are all freely improvised, varying in length from the opener, "Bathyal," at three-and-a-half minutes to "Abyssal" at sixteen-and-three-quarters, a total of over forty-six minutes. The three players demonstrate that they are all experienced, accomplished improvisers with the enviable knack of making improv which sounds free but is structured enough to sound scored. In their three-way discussions, they are equal partners with no one of them dominating or trying to steal the limelight, a feature that is highlighted by the equality of their levels in the soundscape. Yes, occasionally, one will bubble to the surface and command attention over the others, but they never unnecessarily prolong such features. Instead, they are each considerate of the others and afford them adequate time and space to be heard to best advantage. With two contrasting instruments at his disposal, credit must go to Ward for not occupying more than his fair share of time and space, but remaining an equal partner in the group sound. Text-book improv. 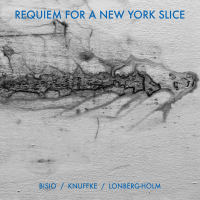 Bisio / Knuffe / Lonberg-Holm
Requiem for a New York Slice
Iluso
2019 As its title suggests, this release shifts the spotlight from London to New York City, the requiem of the title being for the late Mike Panico, co-owner and producer at Relative Pitch Records, who tragically took his own life in early October 2018, aged only fifty- three. Recorded as a tribute, this album features Michael Bisio on bass and Kirk Knuffke on cornet (who were both close friends of Panico, and recorded regularly for Relative Pitch, including a 2016 duo album together) with cellist Fred Lonberg-Holm. Three days after Panico's death, the three players gathered at Park West Studios, Brooklyn, and recorded five spontaneously-composed tracks running for a total of fifty-nine minutes. All of the tracks are titled after texts of the Christian Requiem Mass, starting with "Introit et Kyrie" and ending with "In Paradisium." Of the five pieces, "Agnus Dei" is credited to Bisio alone, the other four to all three players jointly. While the use of those Mass titles may lead to expectations of vocal parts, all the music here is instrumental, although occasionally some of the instrumental sounds—particularly Knuffe's cornet— could easily be mistaken for keening human voices. Despite being recorded so near to Panico's death, and containing parts—most notably, the whole of "In Paradisium"—that are clearly intended to be mournful, by no means is all the music here downbeat or sad. In fact, "Sanctus"—a feature for cornet over bowed bass and cello— and the eighteen-minute "Pie Jesu"—again with Knuffke to the fore and some stunning bass work— are positively upbeat, truly seeming to celebrate Panico's life rather than mourning his death. Altogether, this is a worthy tribute to Panico from three first-rate players whose instruments and styles fit together beautifully well. 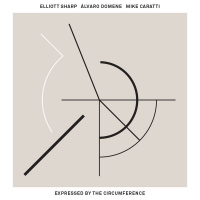 Elliot Sharp, Alvaro Domene, Mike Caratti
Expressed by the Circumference
Iluso
2019 It is a pleasure to round off this selection of Iluso albums with one which features both of the label's proprietors, the first release to do so since 2016's Synaptic Self by dMu, a trio in which they were joined by reedsman Josh Sinton. Here Caratti and Domene are joined by New York multi-instrumentalist and composer extraordinaire Elliot Sharp. Recorded in Queens, NY, in January 2019, the album consists of nine tracks of which none exceeds seven-and-a-half minutes, a total running-time of forty-nine minutes; of the nine tracks, six are credited jointly to the three players, one solely to Caratti and two solely to Domene. With Sharp on electric guitar and electronics or (his less-commonly-used) electro- acoustic bass clarinet, Domene on seven-string electric guitar and electronics and Caratti on drums and percussion, there was plenty of scope for the three to create a full and varied soundscape, which they do throughout. Straight from the start it becomes clear why there are no longer, more protracted tracks here; these guys think, act and play quickly, as if they don't have a moment to waste. The opener and title track sets a cracking pace, urged along by Caratti's crisp drumming. The track also illustrates that the electronic shifts and manipulations by Sharp and Domene make it futile to try and identify what instrument each of them is playing. What the heck, it all sounds great and the playing of the three fits together well; whether they are improvising freely, playing the occasional written passages or locked into a groove together, their music is tight but never rigid. Not only does this album demonstrate Sharp's versatile talent, it also shows that Iluso is in good hands with Carati and Domene. Tracks and Personnel

Requiem for a New York Slice

Expressed by the Circumference