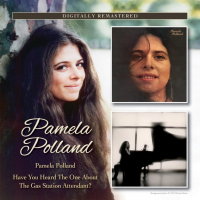 The singer-songwriter movement of the seventies paved the way for several new voices in popular music, but not everyone got the success of Carole King, whose album Tapestry (Ode, 1971) marked a peak in the movement, commercially and artistically. Pamela Polland was one of the artists whom fame eluded.

Polland was poised for a big breakthrough with a record contract for CBS and the staunch support of label president, Clive Davis. However, things didn't turn out as planned. Polland's eponymous debut sold modestly, and Davis had been fired by the time it came to push her second album. Seeing Polland as Davis' pet project, CBS decided to shelve the album and her moment in the limelight was gone. She moved to Hawaii and eventually recorded two albums, Heart of the Moon (Ivory Moon, 1995) and an homage to her new home, Hawaiianized Pop Classics (Self Produced, 2011). She also found a new call as a voice coach—a job she still has today—and dedicated herself to protecting the environment.

While Polland has moved on and has a meaningful life, a 2CD-package released on BGO offers the chance to revisit a golden period in her musical life. It contains a reissue of her debut but, more interestingly, also includes her unreleased second album Have You Heard The One About The Gas Station Attendant?

The self-titled debut finds Polland playing in the vein of Carole King, with her compositions centered around piano and voice, aided by acoustic and electric guitar, bass, drums and choir. "My Imagination" is an uplifting pop song with a soulful gospel touch. The fantasy theme continues on "Abalone Dream," with a Mark Twain motif of floating down the river on new adventures, with a magic mountain in sight.

While there is plenty of wistfulness in Polland's songs, her music is fundamentally bright, and a long way from tortured confessions. Instead, there is a basic joy in playing music, as she builds her songs from elements of pop, blues, jazz and soul into a coherent and distinctive expression. Her songs are already cleverly arranged on the debut, which includes guest spots from blues singer/songwriter and guitarist Taj Mahal and the Memphis Horns, but the orchestral ambitions come fully to the fore on Have You Heard The One About The Gas Station Attendant? Produced by Gus Dudgeon, with Del Newman providing orchestrations, the album takes Polland's intimate songs to new heights. On "Untitled (Dusty Rose)" and "The Ship," Newman's strings gently lift the songs, while the blues spirit shines through on "Thank You, Operator" where Taj Mahal shows up again.

Besides the eleven superb songs of the original shelved album, there are also two bonus tracks that are just as good. With a more direct, rock-influenced sound, the only explanation for their exclusion could be that they didn't fit the predominantly lyrical mood of the album, but they are just as sophisticated as the rest of the music and the catchy "Take In The Light" could have been a regular hit.

Alas, it didn't happen, but now, thanks to BGO and the dedication of Charles Donovan, the song and the album can finally be heard in the ideal context of her debut. Donovan contributes the beautiful biographical essay which accompanies the release along with the full session information, lyrics and photographs included in the booklet. It is a worthy presentation of two lost singer/songwriter classics.

CD1: In My Imagination; Out Of My Hands (Still In My Heart); Sing-A-Song Man; When I Got Home; Please Mr. D.J.; Abalone Dream; The Rescuer; Sugar Dad; The Teddy Bears’ Picnic; The Dream (For Karuna); Texas; Lighthouse. CD2:The Refuge; Wild Roses; You Stand By Me; To Earl; Music Music; Thank You, Operator; Willsdon Manor; Untitled (Dusty Rose); The Ship; Prelude; The Clearing; Didn’t Get Enough Of Your Love; Take In The Light.

Title: Pamela Polland / Have You Heard The One About The Gas Station Attendant? | Year Released: 2019 | Record Label: BGO Records