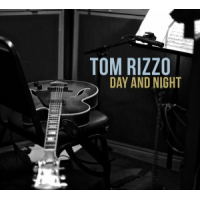 The names in guitarist Tom Rizzo's starting lineup on Day and Night indicate that this is a West Coast-based group, an observation that is borne out in Rizzo's bio, which says he is "active [on] the Los Angeles music scene" and served as guitarist for the Tonight Show band when Jay Leno was at the helm, reinforced by the song "Heart of L.A.," one of Rizzo's four original compositions.

Rizzo's tentet, featuring some of the Los Angeles area's leading sidemen (trumpeter Bob Summers, trombonist Nick Lane, saxophonists Bob Sheppard and Jeff Driskill among them), appears on five tracks, with Rizzo's quartet on the other half-dozen. Lane and Sheppard (tenor) solo smartly on Stevie Wonder's "Living for the City," and Sheppard on Vincent Youmans' "Without a Song," performed in flag- waver mode. Aside from that, the larger ensemble is on hand to provide body and color. Rizzo—whose chops, by the way, are beyond reproach, as is his luminous sound—solos most often, sharing blowing space with pianist Dennis Hamm on the quartet numbers. Hamm, best known for his sorties into Latin jazz, is perfectly at home here, designing a number of trim and stylish ad libs.

The choice of music is eclectic, to say the least. Besides "Heart of L.A.," Rizzo wrote "School Days" (which sounds much like the song written by Gus Edwards way back in 1907), the doleful, Western-tinged "Lonesome Cowboy" and "Matt and Kelly," a laid-back postscript to Henry Mancini's haunting "Moon River," which ends the session. Also on the menu are Cole Porter's "So in Love," Wayne Shorter's "Infant Eyes" (whose engaging melody has less impact when played at a languid tempo), guitarist Peter Bernstein's genial "Little Green Men" and Ornette Coleman's "Law Years."

Before closing, a word should be said about bassist David Hughes and drummer Steve Schaeffer who round out the quartet in splendid fashion. If this is not a working group it probably should be. And if Day and Night isn't widely heard that's no fault of Rizzo, who has sculpted a handsome album that is sure to please most jazz-directed ears.