By PATRICK BURNETTE
October 11, 2017
Sign in to view read count

Newcomers to either Murray or Black Saint can do no better than start with the five-disc set of Murray’s octet recordings. They are a highwater mark for both artist and label. 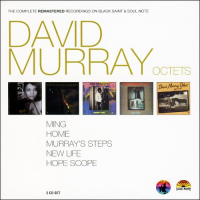 Younger jazz fans may be only dimly acquainted with the Italian record labels Black Saint and Soul Note, but during their prime in the 1980s both labels released jazz that was adventuresome and challenging without losing touch with tradition. As such, the imprints offered a compelling middle way between the major label output of the time (which was increasingly in thrall to the neo-conservative "young lions" movement) and hard-core avant-garde labels releasing music for a tiny number of initiates.

Tenor saxophonist David Murray's cocktail of Ben Webster and Albert Ayler encapsulated Black Saint's ambitious synthesis of past and present and Murray was a flagship artist on the label for many years. Since 2010, Cam Jazz has been releasing the Black Saint / Soul Note catalog in a series of box sets dedicated to individual artists. Newcomers to either Murray or Black Saint can do no better than start with the five-disc set of Murray's octet recordings. They are a highwater mark for both artist and label.

The octet gave Murray, a soloist inclined towards maximalism, an outlet for his talents as composer and arranger. The best recordings of the octet demonstrate just how flexible a group of this size can be, offering the litheness of a combo with the power and harmonic possibilities of all but the very best big bands.

Many listeners consider the octet's first release, 1980's Ming, its best. Certainly the recording features one of the greatest supergroups in jazz. Nearly every chair boasts a hugely distinctive soloist who just also happen to be among the most important composers and conceptualists in the 1980s avant-garde. Henry Threadgill joins Murray on reeds, Butch Morris and Olu Dara play cornet and trumpet respectively, while George Lewis blows trombone. The rhythm section features Anthony Davis on piano, Wilber Morris on bass and Steve McCall on drums (McCall collaborated with Threadgill in Air).

These all-star musicians offer distinctive solos, but also insure that the ensemble work is bursting with personality. The playing absolutely pulses with life, and if it's a bit shambolic at times, that only adds to the charm. (Fans of tightly drilled jazz ensembles should give Ming a wide berth.) Ming is the most intense and "out" of the octet's albums. It is not the best recorded, with a somewhat muddled mid-range. Pianist Davis almost inaudible at times. Your personal ranking will depend on the balance you prefer of energy to organization. It certainly announced Murray's mid-sized ensemble with a bang.

This is the release to pull out of the house fire, along with the family pictures and the krugerrands. 1981's Home keeps the mind-boggling great personnel of Ming while offering charts more explicitly in thrall to predecessors like Ellington (the title track nods obliquely to "Mood Indigo"). Tunes like "Santa Barbara and Crenshaw Follies" & "Choctaw Blues" boast some of the best melodies of Murray's career. The band mixes mystery with rambunctiousness in perfect proportions. "Choctaw Blues," for example, features an undeniable boogie riff by bass clarinet and trombone, then layers a bowed bass solo over it that seems wailed as much as played. When high brass punctuate the proceedings, intonation and attack are off-kilter enough to keep cliché at bay.

Home explores the liminal space where accompaniment and soloing merge and blend into one another in unpredictable yet organic ways. Energy shoots between members of the band like chain lightning. The octet's second album shows that a small jazz ensemble can feature great writing and arranging while somehow remaining jazz all the time. There's not an ossified or predictable moment on the record.

Following the pattern of annual releases, Murray's Steps dropped in 1982. Bobby Bradford replaces Olu Dara on trumpet and Curtis Clark steps in for Anthony Davis on piano, with the rest of the original cast in place. This is another very fine recording and might be a highpoint in many bands' discographies. It suffers only in comparison with the masterpieces that preceded it. As good as the album is, a hint of the ordinary creeps in here and there. Murray's bandmates don't navigate the opener's Coltrane changes smoothly, but that's not why you hire players like Threadgill and Bradford. The intertwining lines in "Sweet Lovely" don't always provide even ugly beauty, while the light calypso of "Flowers for Albert" charms without compelling much interest.

After Murray's Steps, Murray put the group on hiatus for a while. He released two volumes of live recordings by his big band (Live at Sweet Basil, Vols 1 & 2), which, while having fine moments, demonstrated that his talents as a leader and arranger did not scale up smoothly to a large ensemble.

This is the first octet album to feature non-Murray compositions, with one each by Harris and Peterson. Murray struggles to balance his "in" and "out" impulses on this album. On "Ben," the leader's tribute to Ben Webster, the ensemble passages have a tinge of 1930s bounce. Murray's solo begins, at least, in the manner of his dedicatee, before declaring allegiance to Ayler once again. The title track, in contrast, sounds like a lesser Ornette Coleman composition and turns into an extended group improvisation that is rewarding on its own terms but has nothing distinctively "octet" about it, while "Lester" staples a Cecil Taylor-eque piano introduction to a romantic straightforward melody. The new ensemble is filled with great players and there is some burning polyphonic improvisation, but in the passage work the new musicians don't display quite the same freedom and initiative of the original crew. Still, this is a fine album and aside from the title track, it may be the most accessible entry point to the ensemble for a newcomer.

1988's New Life completes the run of octet albums included in the Cam Jazz box. Baikida Carroll replaces Rasul Siddik on trumpet, John Purcell takes James Spaulding's slot on alto saxophone, and Steve Colson takes the piano chair over from Dave Burrell. Murray composes all four of the tunes, but by this point he seems to be questioning the purpose of the octet. The arrangements treat the group like a little big band rather than a beautiful chimera of combo and ensemble. Songs like "Train Whistle" and "Blues in the Pocket" demonstrate the mainstreaming of Murray's vision for the octet. While the solos still probe the stratosphere, the framing gestures are increasingly old-school.

Still, there are pleasures to find on every track. "Morning Song," for instance, begins with a promisingly funky groove and has undeniable momentum, though by the end it's veering towards Sweet Basil territory. New Life is forty minutes of above-average, inside/out jazz goodness. It is probably the least essential of the group's first five recordings, but it's still one of the better small ensemble jazz recordings from the eighties.

The octet reappears at intervals in Murray's discography on various labels, with albums inspired by Coleman Hawkins ("Picasso," named after a Hawkins solo recording), John Coltrane, and, suspend disbelief as needed, the Grateful Dead. The results are variable, and they never reach the heights of the first octet albums. Ming and Home demonstrate what eight jazz musicians can accomplish as ensemble players, as soloists, as eccentrics, as visionaries—all at the same time together. I won't claim to have listened to all two-hundred plus Murray recordings, but of the ones I have surveyed, the early octet recordings are among the very best.