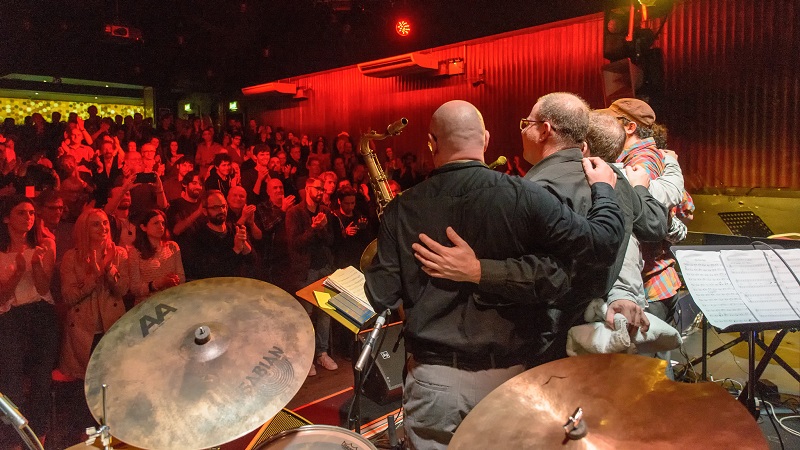 CEO Experiment's Dublin concert with special guest Kurt Rosenwinkel seemed to be a long time coming. For months there'd been speculation that the great American guitarist might rock up for this one-off gig. When it was indeed confirmed, and with the date still several months off, the CEO Experiment publicity machine went into overdrive, launching a sustained social media campaign and giving radio interviews in Belfast and Dublin. The result, when the day came, was a packed venue.

Of course, it may simply have had something to do with the draw-card that is Rosenwinkel, widely considered as one of the most influential jazz guitarists of the last twenty years. Still, for the sheer effort expended in promoting this gig— surely an example to other groups—the quartet of Cote Calmet, Leopoldo Osio, Peter Erdei and Michael Buckley deserved their full house.

In the early 2000s Rosenwinkel toured Ireland with Buckley and they've renewed their musical partnership intermittently over the years. That the two were very much on the same wavelength was clear from their interwoven, improvised lines, the duo dovetailing in spectacular fashion on Osio's "Nossa Historia"—an epic ballad that made for a powerful introduction.

The set was divided between Rosenwinkel's compositions and tunes from CEO Experiment's promising debut CD CEO Experiment (Self-Produced, 2015). Another finely sketched Osio composition, "Portrait," provided a steady, unobtrusive rhythmic framework, with Buckley, Rosenwinkel and the pianist in turn afforded ample space to explore. As Osio gathered momentum so too did Calmet, the swelling rhythms ushering in saxophone and guitar in a rousing back and-forth finale.

Jazz standards were conspicuous by their absence, perhaps surprising given Rosenwinkel's renown for completely reinventing them. Then again, CEO Experiment has built its name on original material while Rosenwinkel himself seems to be moving into new musical territories judging by his latest CD Caipi (Heartcore Records, 2017), which represents a fairly radical departure from his existing discography.

Most of Rosenwinkel's compositions came from The Next Step (Verve, 2001) —tunes he has revisited time and again. "Minor Blues" saw extended solos from everyone bar Calmet, who marshalled the quintet with infectious grooves and telling punctuations; the Peruvian's immaculate time-keeping was visceral throughout but never showy. On the elegant "Use of Light" Osio's unaccompanied intro set the tone for an impressionistic ensemble canvas, with Rosenwinkel's beautifully paced yet fluid solo laden with melodic invention.

The crowd, even those tethered to the bar at the rear, listened in absolute silence during Rosenwinkel's caressing unaccompanied intro to "Zhivago," the ensemble's entry breaking the lyrical spell and steering the tune into more dynamic terrain. Buckley, Osio and Rosenwinkel stamped their individual authority in a series of passionate, interconnecting solos. The guitarist's pedal-altered synthesized sound, here and elsewhere, evoked the spirit of Allan Holdsworth and perhaps more so Pat Metheny, but when in more orthodox electric mode Rosenwinkel's compelling individuality underlined his status as the preeminent guitarist of his generation.

A dark-hued keys-cum-bass ostinato announced "The Next Step," Calmet's bouncing groove propelling Buckley's into spiralling runs whose peaks bordered on the ecstatic. Rosenwinkel latched onto Buckley's tailing slipstream, flying in the currents, with Osio following suit, briefly but powerfully. Saxophonist and guitarist reunited in thrilling overlapping patterns, the ensemble then tightening rhythmic formation for a punchy climax. Buckley's melodious, gently grooving "Tonic" featured seductive solos from Rosenwinkel, and the unassuming Erdei -a superlative weaver of melodious rhythmic contours. The return to the head sparked a change of tempo, building to an explosive conclusion.

In general, when one musician soloed one musician would sit out comping duties, so that for much of the time it was a quartet sound that prevailed. Tandem soloing from Rosenwinkel and Buckley, which would inevitably ignite the rhythm section, was rationed, making the intermittent quintet passages all the more dramatic.

The crowd rose to its feet, demanding an encore. Bubbling bass ostinatos announced Calmet's Afro-Peruvian flavoured jazz-funk workout "Foli." Driven by the drummer's infectious polyrhythms, Rosenwinkel put pedal to the floor once more with a flowing synthesized solo, inspiring Buckley and Osio to their most impassioned improvisations of the evening. Calmet, a tireless servant to the music, finally stepped into the spotlight, delivering an effervescent carnivalesque solo—the prelude to a knockout unison finish. The musicians took their bows to cheers, whistles and applause, having delivered a truly memorable set.

It will be fascinating to see where Rosenwinkel ventures post-Caipi, but his reputation is such that whatever he tackles will doubtless attract considerable attention. CEO Experiment, on the other hand, is only just beginning to make waves. High profile gigs like this will help but momentum, of course, is everything. The timely delivery of a follow-up CD and European dates would certainly help this original, highly talented quartet reach the wider audience its music merits.