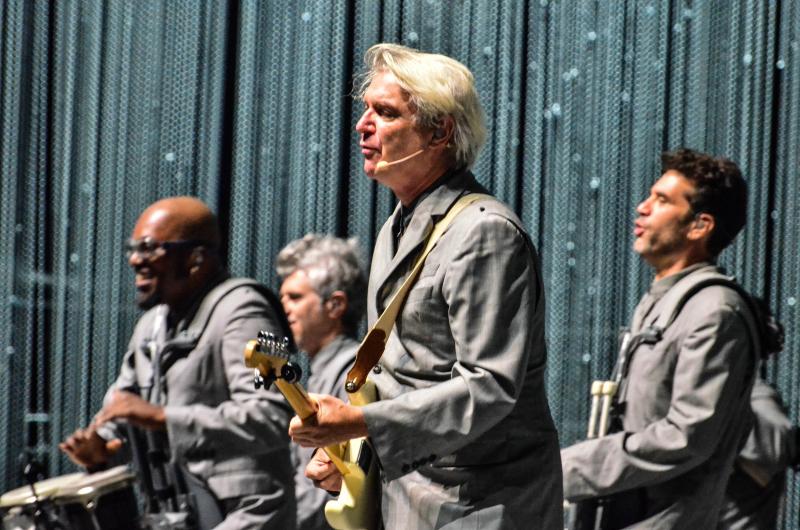 David Byrne first came to prominence as the lead singer, founding member and driving force behind the Talking Heads. Along with Chris Frantz (drums), Tina Weymouth (bass), Jerry Harrison (keyboards, guitar), occasionally Adrian Belew (guitar) and some others, the Talking Heads were active from 1977 when it released its debut album, Talking Heads: 77 (Sire Records) through 1991. During this time, the band released a string of hit studio recordings on Sire Records. These albums included: More Songs About Buildings And Food (1978), Fear Of Music (1979), Remain In Light (1980) and Little Creatures (1985).

Byrne was actually born in Scotland, but his family emigrated first to Canada and then to the U.S. when he was quite young. As a musician, he has made his mark in many different ways: singer, songwriter, musician, record producer, artist, writer, actor, and filmmaker. Since the demise of the Talking Heads, Byrne has stayed very busy, receiving Academy Award, Grammy, and Golden Globe awards, working in numerous mediums such as photography, print, film and of course, releasing solo albums. In addition Byrne is a man of letters, writing in both the fiction and non-fiction genres.

Over the course of his career, Byrne has released four collaborative albums (two with Brian Eno and one each with Norman Cook, aka Fatboy Slim and St. Vincent) and seven solo albums including his latest release, American Utopia (Nonesuch/Todo Mundo Records, 2018).

Forest Hills Stadium has a long and rich history. The intimate outdoor venue was originally constructed on what was, at the time, farmland. It became the original home of tennis' U.S. Open and Davis Cup. In the 1960s, the stadium became the home to a concert series. Over the years, through the 1990s, Frank Sinatra; Barbra Streisand; Jimi Hendrix; Diana Ross; The Rolling Stones; Bob Dylan and The Who, among others, headlined at the venue. Concerts ceased at the venue in the mid '90s. That would change in 2013, when the stadium underwent an overhaul. The plan was to return it to its previous glory as a music venue. In August 2013, the stadium officially reopened with a performance headlined by Mumford & Sons. On a pleasant Saturday evening in mid-September, David Byrne's 2018 tour touched down at the intimate venue in Queens, NY. Following a short and upbeat set by Tune-Yards featuring Merrill Garbus, Byrne appeared barefoot on the stark stage, wearing a tailored grey suit which could never be confused with the "big suit" from the Stop Making Sense-era. The stage was bordered by a silver-beaded curtain at the rear, right and left sides. It was completely empty and stark, except for the table and chair placed at the center-rear section.

The performance began when the lights rose and Byrne appeared alone on stage. The musician sat at the table and, while holding a plastic model of a brain, sang the evening's opening tune, "Here." The concert was nothing like any of the summer of 2018's previous Forest Hills stadium performances. Because of the lack of set places for band members or instruments, the musicians performed while roving around the stage barefoot and carrying their instruments with them as they played.

A good portion of the set featured material from American Utopia. The rest of the set featured songs from all facets of Byrne's career ("Lazy," "I Should Watch TV," "Bullet," "Toe Jam," "Dancing Together" and "Everybody's Coming To My House") as well as Talking Heads' classics such as "I Zimbra" which led straight into "Slippery People," "Once In A Lifetime," "Blind, "Burning Down The House" and others.

Byrne didn't say much. He did, however, comment, "I have been on this stage before, but it was a long time ago." He was referring, of course, to the Talking Heads' legendary August 1983 shows at the historic venue. After that comment, Byrne led his twelve-piece, sharply dressed barefoot band through the rest of the eighteen-song main set journey. The main set ended with tour de force versions of "Blind" and "Burning Down The House."

The audience was buzzing and wondering what he would perform as an encore. Many shouted for the Talking Heads songs "Psycho Killer" and "Stay Up Late." Others were overheard talking to friends about how they wished he'd play 'Take Me To The River.' None of these were played. The three-song encore featured "Dancing Together," "The Great Curve" and the song with which Byrne has chosen to end each show of the tour—a rendition of Janelle Monáe's protest song "Hell You Talmbout." The song makes a powerful statement. It repeats the "Say his name, Say his name, Say his name" lyric/verse and the names of African-Americans who have been killed in ill-fated encounters with the police or due to racial violence.

Sadly, due to noise restrictions in the residential neighborhood in which the venue is located, Byrne's concert had a hard-stop at 10pm. The members of the mostly middle-aged crowd remained in their seats mentally willing venue officials to make an exception to the rule. It wasn't to be, and when the lights came up, the crowd slowly worked its way out of the stadium.

The show was absolutely flawless. The choreography was spot on. The musicianship was tight and note-perfect, filling the stadium with a sound that inspired and caused the audience to sing along while dancing it its seats. The performance was a revelation. While there are a few artists celebrating forty, even fifty-year anniversaries in show business, not all can deliver a performance that is as exhilarating, electrifying, strong and powerful as Byrne's was.