By Mark Corroto
December 1, 2000
Sign in to view read count 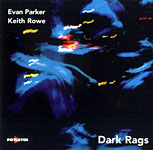 Headlines: The two giants, Evan Parker and Keith Rowe, of British improvisation over the past 35 years, finally get together for this historic duo recording. Rowe, a founding member of AMM along with Eddie Prevost in 1965, has taken the concept of the guitar as an instrument to the most abstract degree. He plays with the guitar on a flat surface, treating it as an electric processor, utilizing feedback and finessed noises for effect. His constructions are at the expense of a deconstructive guitar. Evan Parker was/is a descendant of John Coltrane's musical logic. He took up where Expression leaves off. Parker was a member of The Spontaneous Music Ensemble, the Music Improvisation Company with Derek Bailey, Alexnader von Schlippenbach's bands and Peter Brotzmann's famous Machne Gun session. He has also been recognized for his circular breathing and extended techniques in solo concert, duos with either Bailey or drummer Paul Lytton, and trios adding Barry Guy. Parker's discography rivals that of any working creative music today. But what is significant, is the many sides to his playing, from the furious solo flights to his relatively (for him) subdued Electro-Acoustic Ensemble.

Recorded live as 1999 became 2000 at Pannonica in Nantes, France the duet maintains the subtlest free improvisations I've ever heard. The two parts act as ragas or 'rags,' the Indian meditation music. Rowe's use of almost ambient noise and circulating guitar loops lay out a calmness over the proceeding, and Parker acts accordingly, playing free but without disturbing the soul. Bits of gray noise float in, I hear a radio searching for a station, all the while Parker (on tenor throughout) keeps the peace.

It is easy to be lulled into this music, but don't mistake their relative pacific nature for anything less than complex improvisations. Parker and Rowe have honed their craft over these many years to be in full control over this message. In the relative quiet there is fury. Sometimes an opinion can be best expressed when said in a whisper.