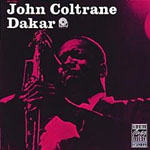 Often cited as saxophonist John Coltrane's first album as leader, Dakar—recorded on April 20, 1957—is a usurper. Originally credited to the Prestige All Stars (and released as part of a short-lived experiment with 16-rpm discs), it was only credited to Coltrane on its re-release in 1963, when the saxophonist's star was firmly in the ascendant. The Dakar session was one of several Coltrane appeared on as a sideman that week—on the 16th with pianist Thelonious Monk, on the 18th with the Prestige All Stars, and on the 19th with pianist Mal Waldron. He gets no more solo time than either of the other saxophonists, baritone players Cecil Payne and Pepper Adams. Another day, another dollar.
If it's anyone's baby, Dakar—here released as part of Prestige's Rudy Van Gelder Remasters series—belongs to Teddy Charles. The vibraphonist and bandleader produced the sessions, composed three of the six tunes, and—crucially—picked the line-up. Clearly, he didn't have a Coltrane album in mind, more a meeting between the elder statesman of bop baritone, Payne, and the younger hard bop stylist, Adams. Coltrane, his tenor already possessing the incisive sound which took wings on Giant Steps (Atlantic, 1959), works like spice amongst Payne's lighter, at times Lester Young-ish tone, and Adams' tougher, more abrasive one (not for nothing was Adams nicknamed The Knife).
It's rough and ready music, almost certainly rehearsed for the first time in the studio (with the clock ticking), but it sure is ready. The three saxophonists roar into the opening title track, Payne soloing first, then Coltrane, then Adams. There's a fierce, devil may care atmosphere, rolling around in the sound of the instruments, which establishes a mood sustained throughout the album. There's a telling moment towards the end of the closing "Cat Walk" when Payne's baritone emits a horrible squeak. Even in 1957, most producers would have asked for another take, or got busy with a razor blade. It's retention, for whatever reason (lack of money, lack of time, confidence in the fundamental quality of the music), on the finished album adds to the sense of reportage and the enjoyment.
There's just one ballad, Waldron's "Velvet One," on which Coltrane's tenor states the theme over soft riffing from Payne and Adams, and which gives a taste of the lyrical magic Coltrane would later weave on Ballads (Impulse!, 1962).
A minor chapter in the Coltrane canon it may be, but Dakar is a characterful set of propulsive, pre-codification hard bop and still a delight over half a century later.