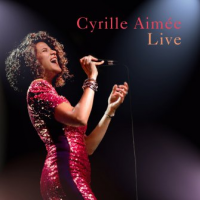 As a little girl, Cyrille Aimee would climb out of the bedroom window of her home in Samois-sur-Seine, near Fontainbleau in northern France and run off to join local gypsies by their camp fires, playing jazz and singing just as they did with Django Reinhardt (who is buried nearby).

Reinhardt never managed to acclimatize himself to the international stardom that eventually came his way as a guitarist. He was forever yearning back to those happy, carefree days in northern France.

Similarly, the fierce joy Cyrille Aimée felt singing round the manouche camp fires is what she tries to communicate to her audience in New York night clubs like the Poisson Rouge where this stunning live album, was recorded.

It's what brings her shows alive and makes her to stand out from the current crop of girl singers. There's a sense that she is in touch with something wild, free and authentic... and it elicits whoops of joy from her fans.

Not that Aimée sings manouche, and not that her band plays manouche. She takes care to provide a remarkably varied program, ranging from a nicely subdued version of "It's A Good Day," which Peggy Lee used to sing with Benny Goodman, to Thelonious Monk's "Well You Needn't," stopping off at Michael Jackson's "Wanna Be Startin' Somethin.'" Through it all, her musicianship—and that of her band—is impeccable.

"Nuit Blanche" is her own, catchy chronicle of a sleepless night. She follows it with a number by Sidney Bechet, "Si Tu Vois Ma Mere, (If You See My Mother)," from which you'll gather that the lady is faithful to her roots but also conscious of the need to keep things up to date. This she does with a great version of Stephen Sondheim's "Live Alone And Like It."

Then, following such fireworks, Aimée deftly winds up the show with "Each Day," a bossa she wrote with guitarist Michael Valeanu. All in all this is a masterly performance from a young lady destined to be a star...if she isn't one already.

It’s A Good Day; Nuit Blanche (White Night); Si Tu Vois Ma Mere (If You See My Mother); Live Alone And Like It; Wanna Be Startin’ Somethin’; Off The Wall; Day By Day; It’s Over Now (Well You Needn’t); Three Little Words; Each Day.