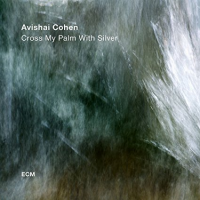 If trumpeter Avishai Cohen's ECM debut, Into The Silence was a work of deeply personal content, Cross My Palm With Silver plays out with the same emotional impact, but on a global stage. Cohen composed the five pieces on this album in his native Israel, while contemplating the impact of political division on the human psyche. His hope is that the music contributes to a healing process.

Returning from Into The Silence quintet is drummer Nasheet Waits, a member of Cohen's Triveni group and whose close ties to the leader make for a seamless synergy. A long-time collaborator, pianist Yonathan Avishai, had also played with Cohen and his two siblings (multi-reedist Anat Cohen and saxophonist brother, Yuval) in their namesake trio. Replacing Eric Revis on bass is Barak Mori, a friend dating back to high school. Bori has most recently appeared on Madeleine Peyroux's Secular Hymns (Verve, 2016).

The sound—if not the sentiment—on Cross My Palm With Silver is quite a bit different in comparison to the previous album which included tenor saxophonist Bill McHenry. "Will I Die, Miss? Will I Die?" opens with Cohen's mournful muted trumpet, Avishai quietly adding background color while Waits brushes the cymbals. At more than ten minutes, Avishai and Cohen have the space to trade leads taking the piece to its forlorn conclusion. In a halting manner, Waits and Avishai usher in "Theme for Jimmy Greene" setting up for Cohen's evocative response. The piece builds up to a dramatic swell then ends reflectively.

"340 Down" opens minimally with haunting trumpet, augmented by Waits light touch before Bori and Cohen layer in a more complex textures. Avishai's extended solo—with an off-kilter classicism—begins "Shoot Me in The Leg," the most abstract of the compositions on the album. Another long piece, it closes with a haunting solo from Cohen. "50 Years and Counting" closes the album with an upbeat theme and Cohen playing at his freest.

Cross My Palm with Silver has a political point to make, reflecting the turmoil of the Middle East and global conflicts elsewhere. Titles like "Will I Die, Miss? Will I Die?" and "Shoot Me In The Leg" are testimonials to that effect. There remains an otherworldliness in much of Cohen's music whether elevating or affecting and he importantly, avoids saccharine effects in conveying powerful emotions.