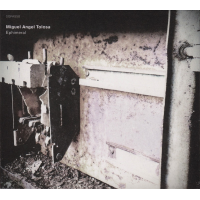 Spanish sound designer Miguel Angel Tolosa is a Renaissance man, performing on all instruments and / or devices while demonstrating his audio engineering prowess on his inaugural solo album for the Norwegian experimental record label, SOFA Music. Moreover, he's been an integral part of this label's output while also recording for other US and European entities and having his compositions interpreted by flutist Allesandra Rombala and Trio Arbus among others.

Per Tolosa, the premise for this outing is not meant to be a socio-political diatribe or steeped in religious values. It's all about experiencing time "through listening with an additional, subtle emotional element." He succeeds on numerous levels, whether signaling notions of vintage Brian Eno amid some good old cosmic bliss on the opener "Rio De Cristal," or on other works accentuated by brooding electronics passages that kindle imagery of orbiting a black hole star or something to that effect. Consequently, the pristine and detailed soundstage is an additive when Tolosa is stacking layers of swarming synth patterns above darkly shaded chords, where the underlying musical concepts share similar tonal aspects.

The artist captures the timelessness of intergalactic voids by imparting depth and extended EFX-related voicings. "Sol De Plomo Y Purpura" is a contemplative and serene piece, framed on a vast plane, although "Fragmentos De Ti" features a reverberating sonic attack trimmed with steely treatments and foreboding implications. Other pieces cast notions of having a date with Armageddon via sizzling EFX and ominous connotations. But "De Un Pais De Hierro" summons imagery of a galactic mechanical machine, built with churning gears, ghostly voices and a whole lot of shaking and trembling.

Tolosa is spot on by stating his objectives concerning "the subtle emotional element" and not framing his work on distinct topics or predetermined subject matter. It's one of those electronica endeavors that transforms itself into different hues, shapes and mindsets on each additional spin.