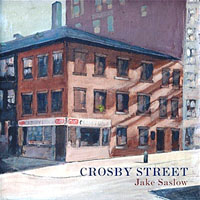 One of 2011's many notable debuts is saxophonist Jake Saslow's Crosby Street, an ode to the street in New York's iconic SoHo, where the musician's formative years recalled the neighborhood's sights, music, and people. An analogy is formed between the music and the community, one that speaks of a distinct personality carried in Saslow's full-bodied horn that's filled with lyricism and communication interpreted by peers and fellow-New Yorkers that include guitarist Mike Moreno and pianist Fabian Almazan.

The seven pieces visualize an assortment of aural dreamscapes and tempos, supported by bassist Joe Martin and drummer Marcus Gilmore, as the soloists deliver lively movements in Saslow's "Early Riser" and "Taiga Forest." But it's the chord-less trio rendition of Horace Silver's "Lonely Woman" where Saslow's sepia-toned notes give a truer indication of his capabilities. Its depth and detail exudes not only knowledge of the source material but also a fresh statement.

"Lucky Thirteen" is the smoothest piece in set with its street-savvy cadence and elastic solos, whereas "Until Next Time" has the most personality. With a rich sonic quality it begins slowly with Saslow's sumptuous horn, before the melody changes and swings seductively, carried by Moreno's unique phrasing. It's got a certain ambiance and personality—just like a vibrant neighborhood, the essence of what Saslow's debut portrays.