Cronies, A Burlesque: Adventures with Ken Kesey, Neal Cassady, the Merry Pranksters and the Grateful Dead

BY DOUG COLLETTE
January 9, 2022
Sign in to view read count 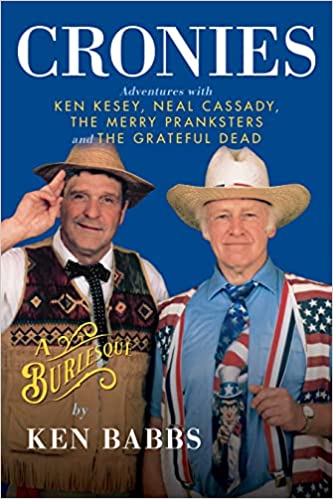 Readers of Tom Wolfe's The Electric Kool-Aid Acid Test (Farrar Straus Giroux, 1968) will no doubt recognize the name 'Ken Babbs.' Something of an operations guru to the main idea man of the Merry Pranksters, novelist and cultural icon Ken Kesey, Babbs was in the thick of things during, among other escapades, the Acid Tests in San Francisco and the now-mythic cross-country trip in the psychedelic-painted school bus (appropriately) dubbed 'Further.'

It's one thing, however, to read observations from a distance, as in the aforementioned esteemed author's book and quite another to hear first hand accounts. As recounted by the second-in-command Prankster himself during the course of Cronies' five-hundred some pages, Babbs offers just such an intimate perspective. Still, he keeps a healthy detachment in his wizened account of contemporary history, an attitude that may be particularly apropos considering the word 'burlesque' segues into the subtitle Adventures with Ken Kesey, Neal Cassady, the Merry Pranksters and the Grateful Dead.

Maintaining some skepticism, however, doesn't necessarily undermine the veracity of the content or Babbs himself. In fact, in a strange way, adopting and maintaining a position of cool remove is right in keeping with the intrinsically inquisitive nature of Babbs, Kesey, et. al.: these colorful figures were at the vanguard of a shift in cultural values whereby progressively widespread challenges arose to long-established mores about relationships personal and political as well as societal conduct in general. This book suggests ever so strongly that this motley crew's existence functioned like their titular leader's, i.e., as a nexus between the Beats of the fifties and the hippies of the sixties, if for no other reason they were equally reverent of both movements.

Ken Babbs is careful to lay the groundwork for his (mostly) vibrant tale by stipulating the conventional backgrounds of the principals. Therein lies the intrinsic sense of organization they practiced from their earliest collaborations and the coalescence of the Pranksters. By the time of these events, for instance, Ken Kesey had established himself as an author of note through the publication of One Flew Over the Cuckoo's Nest (Viking Press, 1962), with Sometimes A Great Notion (Viking Press, 1964), his second novel, on the threshold of release. Meanwhile, Babbs had joined and left the Marine Corps after attending graduate school at Stanford University. They, like their brethren such as Lawrence 'Ramrod,' Shurtliff (who would go on to a longstanding career in the crew of the Grateful Dead), were hardly mindless anarchists, but rather purposeful purveyors of alternatives to conventional wisdom.

With Kesey's sophomore opus due to be issued during the 1964 World's Fair in New York, the group thus had all the motivation necessary for their sojourn to the publishing house in New York City. The pace of events is breathless, almost dizzying, from California to Houston to New Orleans, Georgia and finally Manhattan, due in no small part to the vehicle being driven by Neal Cassady; it's difficult not to read Cronies in large chunks because the writing is so highly infectious. In fact, the sensation isn't altogether dissimilar to that derived from reading Wolfe's and—dare it be said?—even Jack Kerouac's On The Road (Viking Press, 1957) (wherein the man at the wheel for the Pranksters during this interval was the model for 'Dean Moriarty' in the aforementioned classic of modern literature).

A certain nagging sense of stasis is fleeting as this tome approaches mid-point. Otherwise, Babbs vividly describes all that goes on around him. Yet he never overly-explains. And that's fortunate considering the subjects range from the group's deliberately creative approach to personal hygiene to the palpable fear arising from the brakes failing on their highly-customized vehicle. The Merry Pranksters ultimately come off as something of a collective Zelig, not necessarily in the middle of cultural milestones like Woodstock, but not exactly relegated to the fringes either.

For all intents and purposes, Kesey, Babbs and company became masters of serendipity. Through good luck and bad, they taught themselves how to assume a position on the perimeter of an event—even ones self-created like the Acid Tests—while simultaneously remaining fluid enough to enter the thick of things without necessarily disrupting the flow of the action. Or, for that matter, attending to personal matters that demanded attention, whether it was improvising a repair to one of their vehicles or handling an encounter with authorities law and otherwise (the latter including keeping Kesey safe when he was on the lam from his jail imprisonment). Of course, the Pranksters and their circle had no issues being the focal point of an occasion when they chose to, such as the Acid Test graduation ceremonies.

These three parts of sixty-nine chapters, wherein figures who seem peripheral here, such as author Larry McMurtry or founder of The Realist magazine Paul Krassner, blithely pass through the prose, constitute an auspicious launch for Tsunami Books. Such propitious circumstances are fully in keeping with the forward-looking mindset permeating the flurry of activity Ken Babbs depicts in Cronies.