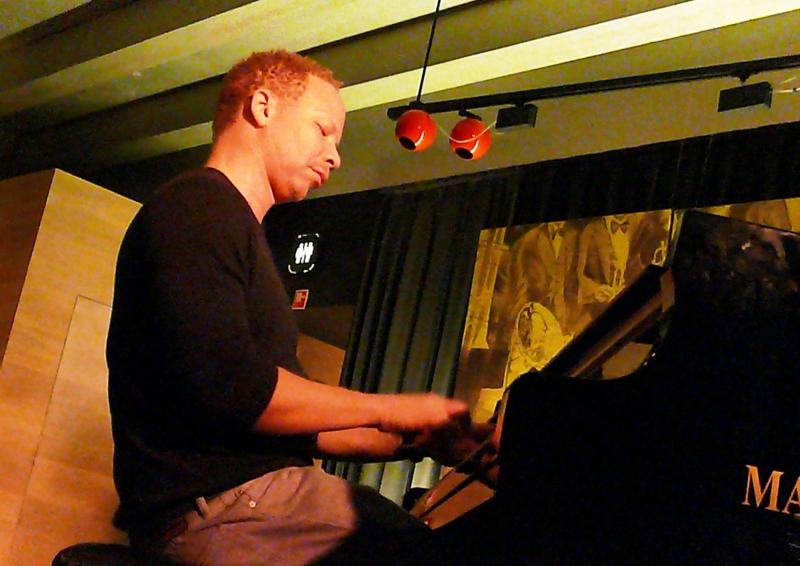 For some an enforced line up change mid tour might have spelled disaster. But pianist Craig Taborn's trio rode their fortune and delivered a, likely adrenaline-fuelled, wonderful performance. When drummer Gerald Cleaver, Taborn's most longstanding accomplice, pulled out for medical reasons, the pianist called up reinforcement in the shape of hometown stickman JT Bates. He flew in from Minneapolis, arriving just half an hour before the soundcheck in the Belgian city of Gent midway through a series of European dates. But you would never have guessed had Taborn not spilled the beans.

Long acknowledged as a superlative sideman, it's only recently that Taborn's leadership expertise has garnered the attention that his work has deserved. While Light Made Lighter (Thirsty Ear, 2001) gave some intimation, it wasn't until Avenging Angel—his 2011 solo disc on ECM—which made critics sit up and take notice. Almost without fanfare, his trio has become one of the finest ensembles operating today, a status confirmed by Chants (ECM, 2013) which made many best of year lists. But in fact they had been honing their craft for some eight years before hitting the studio, which goes some way to explaining the fully formed nature of the band's approach.

Touring in support of the album, the trio inaugurated the new season at Gent Jazz Club . Hosted by the capacious Belfort Cafe, the club boasts an enviable situation, right in the heart of the historic Old Town, barely a stone's throw from St Bavo's Cathedral (home of the Gent Altarpiece celebrated in George Clooney's The Restoration Men). Whether the setting or the performer was the draw, the cafe was jam-packed with a sizeable but attentive throng.

Though the album supplied much of the repertoire, Taborn didn't play it straight. Radio broadcasts from previous tours suggested that both the setlist and its delivery varied from show to show. Indeed there was more than a hint of spontaneity tonight. Morgan and Bates fully bought into the leader's conception, balancing compositional elements and intricate off-the-cuff invention, to exhilarating effect. Thus the tunes evolved from open play in which both bass and drums were as likely to set the direction as piano. Sometimes Taborn didn't reach for a particular sheet until already deeply enmeshed in group interchange, so confident was he that the others would follow his lead.

Bates kicked off the first set, deploying flurries of overlapping meters which seemed to scuttle around his kit. Bassist Thomas Morgan picked up the pace with astute whirls of two or three notes. Taborn sat waiting for the right moment to join in. Once it materialized, there ensued a roomy passage of open improvisation. Bates used his hands to gently smite cymbals and small sticks to create fleeting contacts. Gradually the threesome began to amass density, but still only through the combined impact of sparse individual inputs, until magically they burst into the gloriously interlocked "Saints," the opening cut on the CD.

Taborn rocked back and forth on his stool, rhythmically stabbing out chords and clusters. Bates accompanied with a constant chatter while Morgan supplied a slower deliberate counter pattern. As matters progressed, Taborn added sly fragments of thematic material with his left hand. At the same time his right tickled a continuous tremolo in the treble register, ramping up the tension to unbelievable levels. Resolution of sorts came when he launched a bravura outpouring with his right hand, while with his left he continued to pick out the theme, doubled by Morgan on bass. While all pianists develop the facility to pursue independent lines with each hand, Taborn has taken the skill to another stratum. By the end of the piece Taborn laughed at having given both Bates and Morgan such a thorough workout.

Such multifaceted grooves furnished one of the main characteristics of the evening. They contrasted starkly with the spacious minimalist renditions, best exemplified by the merest whispers of sound that distilled into the haunting "Cracking Hearts" midway through the second set. Morgan took the initiative, allowing the silences to sing out as much as the notes. Taborn shadowed him a purposeful millisecond behind. Bates draped chains over his cymbals which he subjected to the tenderest of perturbations. Sudden emphatic outbursts rang out amid the stillness, before the sounds cohered into a recognizable song once again.

Although only 33 Morgan has been part of the trio for the past ten years, and that experience showed. The only one of the three to play without scores, he also adroitly navigated his way through the unfettered exchanges always ready to ease into dialogue as hints of Taborn's charts emerged from seeming chaos. Even though he confined himself to pizzicato there was no lack of variety. With his nimble, long-fingered, careful but inspired sound placement, Morgan's resonant melodic figures acted as a counterbalance to both Taborn and Bates, often anchoring their turbulent flights.

Bates hails from a background in avant rock as well as improv and jazz, so proved amply equipped to deal with whatever transpired. In some ways his active yet understated style resembled that of the absent Cleaver. He reinforced the parallels by readily locking into the complex grooves and hip hop rhythms. So well did he adapt that at one point Taborn actually stopped playing to remark in awestruck tones that JT was a bad motherfucker as he had only seen the music three hours ago and now he was all over them. His contributions to the quieter sections were subtle yet enthralling, whether he swished his brushes through the air or positioned whirring motors on his drum heads.

For Taborn stunning dexterity is almost the norm, and he didn't disappoint. But more pertinent was the way in which he always put the group dynamic first. For example, when Morgan staked out the foreground on the second piece of first set, Taborn rubbed the strings and plucked among the piano innards. Later he slapped the soundboard to add another percussive layer to the interplay between bass and drums. Often Taborn unselfishly established the superstructures around which the others could orbit, until their embellishments fell within the gravitational field of his insistent themes.

A dazzling passage at the end of the second set constituted perhaps the pinnacle among many highlights. Taborn locked into another devilish riff. The others tracked him to evoke an ultra involved Morse code comprised of three different but simultaneous parts. One held down in each hand by the pianist, with Morgan overlaying another line, while Bates drew them together with well-placed accents. Taborn slowed and deconstructed, only to first reassert and then mutate the vamp in a dizzying tour de force.

The encore was well merited and left the crowd humming the crowning riff as they filed out of the cafe. But significantly given the circumstances, the wide smiles suggested it was as much fun for Taborn and company as it was for the audience.