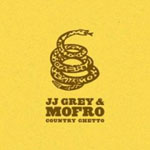 It's rather promising for a band's debut to remind you of the Faces on the fast numbers and of Otis Redding on the slow ones, but these legends provide solid points of reference for JJ Grey & Mofro's Country Ghetto.

Country Ghetto is swampy, funky, bluesy, and above all genuine, straight from JJ Grey's backwoods home in the swamps outside Jacksonville, Florida. Grey composed and arranged every tune, sings lead, and plays keyboards as well as acoustic, electric and twelve-string guitars. Daryl Hance on guitar and slide guitar, Adam Scone on organ and keyboard bass, and George Sluppick on drums help Grey cook, stir, and boil up this scalding pot of country boogie as MOFRO, named in honor of a lumber company for whom Grey once worked.

Here's where Grey comes from: "I was brought up to earn it and not waste it, to respect and protect womanhood and promote manhood, and to be thankful for what you got. By today's standard, we ourselves and most of the folks we knew, lived below the so-called 'poverty line.' We were land and culture rich and dollar poor but I wouldn't trade my upbringing for any other," Grey reflects in the liner notes. "My culture, my life, my love is here in this country ghetto."

Country Ghetto's title track thumps up from under that poverty line to chase the ghost of Tony Joe White's classic "Polk Salad Annie," slide guitar and harmonica howling in the background like an approaching twister. Grey's vocal in the deliberate two-step stomp "Tragic" is gnarled and strong and deep, like the roots of a hundreds-year-old cypress tree. "Mississippi" pulls in the sound of southern Stax Records soul, with its organ groove and horn blasts shining like Booker T. & The MGs and the Memphis Horns, and the dual guitars channeling the legendary Steve Cropper. "Good things are going on, here in Mississippi," indeed.

"Circles" is a slow-burning blues about how what comes around goes around, though not always in the way that you might think. Grey delivers lines like, "Please forgive me for what some other man did to you before I came along," with resignation and power that sounds authentically full of hurt.

Finally, "Footsteps" busting into "Turpentine" is not only the best thing on this record, which is really saying something, it's probably the best combined five minutes of southern rock boogie that I've heard since...well, probably ever. Drums slam out its fat 4/4 beat straight and true as organ and harmonica howl and moan and slide guitar screams out the electric agony and ecstasy, the rough-hewn and sweating-booze sound, of the blues.

Put it all together, and it's how Creedence Clearwater Revival might have sounded had they come along after grunge instead of before: Hand-stitched, unpretentious, honest blues. It's as simple—and simply awesome—as the beauty in Grey's opening lines to "Mississippi": "Well, I dearly love my home/But it's never looked so good to me/Blue skies and dragon flies/Muddy creek, Lord, set me free..."