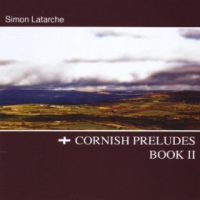 Simon Latarche's sophomore outing is the sequel to Cornish Preludes (Pentreath Music, 2010) and features the same fine ensemble that shaped the success of that debut. Cornish Preludes Book II continues the UK-based composer/pianist's scholastic pursuit of Claude Debussy's approach to impressionist composition. Combining his academic interest with the influences of Cornwall's colorful history and natural beauty, Latarche has produced another winner.

The full ensemble is engaged to a somewhat greater extent on Cornish Preludes Book II compared to its predecessor, but within the larger group setting Latarche launches a number of breakout session for different players. All hands are onboard for the opening "Tall Ships in Falmouth," which kicks off with the force of a George Russell big band rather than a prelude. Similarly, brass and reeds take charge in "The Inimitable Mr Cook," building from a rhythm and blues tempo, and "The Siege At Pendennis," featuring a bracing solo from saxophonist Paul Haywood.

Latin influences may seem an unlikely link to Cornwall, but the region had a global reach in the nineteenth century as its tin, gold and copper mining interests expanded to South America. Cornish Preludes Book II celebrates those connections in the samba-flavored "Love in the Afternoon," as well as the tropical island feel of "Summer Evening Moon" and bossa nova-infused "Homage to Jose Penberthy." Smaller group dynamics take the stage on the slower-paced "Sunday At the Gallery," where Latarche and bassist Steve Turner take their first substantial solos. Likewise, the bluesy "Seasons Over Years" is more aligned with a trio format. "The Lady of Dozmary Pool" features a moody intro from trumpeter Robin Pengilley and also maintains the smaller group atmosphere. As with its prequel, Cornish Preludes Book II closes with a beautiful solo from Latarche.

Knowledge of the cultural and natural uniqueness of Cornwall isn't a prerequisite for appreciation of Cornish Preludes Book II. However, it helps in framing how inspiring its history and ecosystem can be to an artist. Still, the credit for transforming history and geography to remarkably diverse compositions and arrangements goes to Latarche and his fine group of musicians. This is a democratic setting where all the musicians shine but none gratuitously dominate. Latarche's ensemble has stretched the scope of its talents over the course of its past two recordings and holds a great deal of promise going forward.