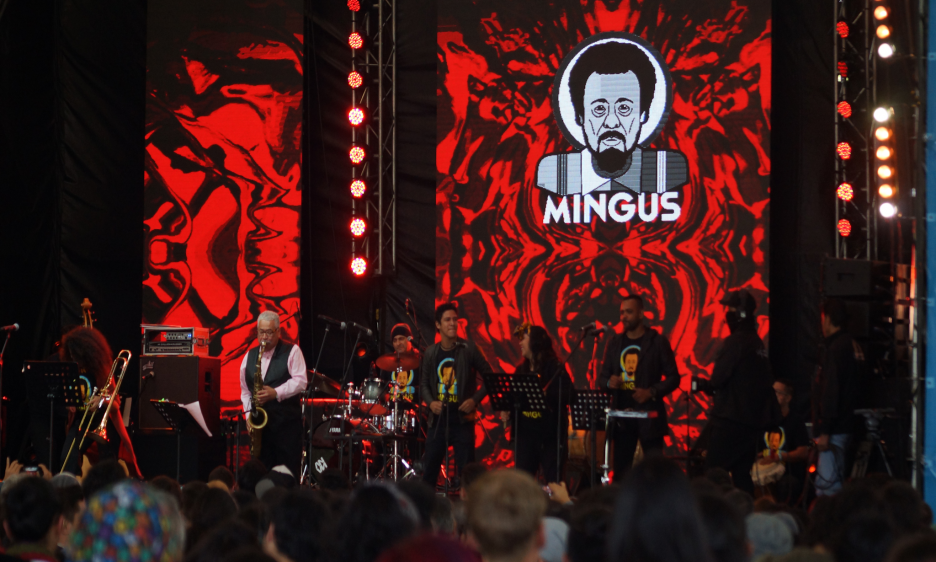 The two-day series of performances featured crowd-pleasing styles from throughout the broad panorama of jazz-related genres, from jazz fusion and swing to mainstream and avant-garde forays.

As outdoor concerts go, the scene couldn't be any more welcoming than the former country club and polo grounds that serve as home base for Bogotá, Colombia's annual Jazz al Parque. Bordered on two sides by upscale condominiums, the venue lies in the shadow of a nearby range of the Andes. The meticulously-manicured grounds skirt the vintage horse stables that recall the site's earlier role as a gathering place for wealthy polo aficionados. Now used on a regular basis as a site for large scale concerts, the stage has been retrofit into an enormous, open-sided barn once used to train polo ponies. Several thousand music fanatics can squeeze into the covered space to get closer to the performers. Other attendees elect to bask on the turf or lounge in improvised hammocks, their view of the performing artists limited to concert images displayed on a mega-size TV screen. Because this metropolis of over 10 million is situated on a broad plateau at almost 9,000 feet above sea level, temperatures plunge when the sun goes down, and experienced concert-goers come prepared, wearing layers of sweaters, parkas and mufflers. A nip or two of Colombia's famed aguardiente—high octane firewater—is the way some fight-off the evening chill, but Jazz al Parque sees to it that not so much as a drop of any kind of alcoholic beverage makes it into this family-friendly venue. Upon arrival, male and female fans are segregated for pat-downs by police officers and a close inspection of backpacks and purses.

The two-day series of performances featured crowd-pleasing styles from throughout the broad panorama of jazz-related genres, from jazz fusion and swing to mainstream and avant-garde forays. Not that many years ago, U.S.-based musicians would have dominated the programming of many Latin American jazz festivals. Today, however, a profusion of regional and national talent has shifted the spotlight more to artists largely unfamiliar to North American observers. Thanks to constantly improving jazz education opportunities in such major cities as Bogotá and the lure of traveling to the U.S. to enroll in jazz programs at Berklee, New England Conservatory and other elite schools, many Latin American nations how boast large numbers of jazz talents. This year, the sole U.S. presence among the festival's 15 performances was jazz and blues vocalist Rene Marie and her long-serving trio—pianist John Chin, drummer Quentin Baxter and upright bassist Elias Bailey.

Stylistic outliers were Itapoá, a Medellín (Colombia's second largest city) based ensemble recreating tuneful hits by such Brazilian artists as Jorge Ben and Djavan, and The Swinging Brothers, a group from Barcelona, Spain that performed to perfection a mixture of early swing and Gypsy jazz classics. Featuring two guitars and a vocalist front man who also played trumpet, the band energized a contingent of local jitterbug groupies who carved out a space near the stage and danced euphorically through the 45-minute set.

Fusion-oriented performances by the Santiago Sandoval Quintet and the La Solidad quintet featured the standard sax and electric guitar frontline. The latter group was notable for the presence of Sebastián López, a Chilean saxophonist who has found a home in Colombia and most recently has conducted Bogotá's youth big band.

The night largely belonged to Arocena, the charismatic Cuban vocalist, and René Marie. The native of Havana, whose robust, earthy style has been influenced by Celia Cruz, La Lupe and numerous pop and R&B artists, Arocena makes for a mesmerizing stage presence. Dressed in the white garb of a Santeria priestess, she may be short in physical stature but looms over her surroundings by virtue of her rousing vocalizing and theatrics. Marie, by contrast, was the festival's flag carrier for the elegant style of jazz and blues that once was the norm. Rather than the blue jeans and sweat shirts of the fusion groups, the singer made for a regal presence, dressed in black and with a string of pearls. The trio, dressed in suits or sports coats, underscored their passion for a more formal appearance. Marie sang mostly originals and impressed the audience with her flawless scatting and silky, soul-drenched balladry.

Perhaps the festival's most impressive performance was the recreation of the fabled Charles Mingus 1977 recording Cumbia & Jazz Fusion. The landmark production married the rhythm of Colombia's funky folkloric cumbia style to the bassist's avant-garde perspective. Although the album had no direct Colombian involvement, save the reference of the cumbia, it has been cherished throughout the decades by Colombian musicians who saw it as an important recognition of their country's most notable music style. The venerable tenor saxophonist Justo Almario, a native of Colombia's Caribbean coast, was the star attraction. The large ensemble, organized and led by percussionist Einar Escaf of the Colombian city of Barranquilla, rampaged through the intoxicating blend of folkloric and modern jazz elements, celebrating the 40th anniversary of this revolutionary Mingus statement.

A return to the mainstream was offered by Spanish bassist Javier Colina and his combo, featuring Colombian saxophonist Gilberto Tico Arnedo, one of his country's most respected jazzmen. Colina, for his part, has been a commanding presence in the Spanish jazz community, having performed with a who's who of leading jazz artists, from Michel Camilo to Pat Metheny. Their performance was the essence of chamber jazz—rhythmically seamless and passionately executed.

The festival's closing act featured Jane Bunnett and her female Cuban ensemble Maqueque. This was yet another commanding performance, with surging rhythms informed by traditional Cuban forms one moment, funk and R&B the next. Bunnett's soprano sax work, intense, edgy and rhythmically savvy, was particularly impressive. Most importantly, the young Cuban musicians seemed to be having the time of their lives, turning in a sassy performance that wowed the audience and left them yearning for the arrival of next year's Jazz al Parque.

In recent years, this capital city has become one of the most inviting major city destinations in South America. Long gone are the days when it was dark and dangerous, with the threat of car bombs around every corner. Today, the city seems to have been reborn, with rampant construction, posh new neighborhoods, and a well-preserved historic center full of architectural curiosities, historic sites and novel dining and bar-hoping experiences. The city's Gold Museum is one of the premier museums in the world, and El Dorado, the recently rebuild air terminal, is highly regarded as being the most modern and efficient in all of Latin America. The city has developed quite a "foodie" scene, with new restaurants popping up literally every day. Monserrate, a site reached via a dramatic cable car ride, is both a tourist destination and a destination for religious pilgrims. At over 10,000 feet above sea level, with a commanding view of the whole of the city, a visit should be on the must-do list of every visitor.

Bogotá has also become home to some of the most arresting street art in the world. The city has set aside wall space on a former industrial zone for muralists of international acclaim to paint wondrous works of art. But on virtually every corner there can be found examples of street art that is worth taking in.

The city holds many hidden treasures. For instance, on Calle 11, a side street that runs off of Plaza Bolívar, one of the largest public squares in the world and home to the country's congress and supreme court, one can find a cluster of shops all specializing in hats, including all varieties of fedoras, Panama hats and Colombian headwear from the nation's various regions. Fascinating.

On Sundays, many of the city's main boulevards are closed to vehicular traffic and are engulfed with locals walking their dogs, riding bikes, jogging or just strolling. Bogotá claims to have more miles of designated bicycle lanes than any city in the world, and your correspondent had an opportunity to experience the city on a breezy day in September on a mountain bike. The 18 km tour was a memorable experience. Given that the city is less than a five-hour flight from several U.S. departure cities, Bogotá is an easy-to-reach destination with much to offer. Topping it off, the local music scene is vibrant. Jazz al Parque is but one of a series of concerts in the country club park that included Hip-Hop al Parque, Rock al Parque and Salsa al Parque. What's not to like?

Thanks to the helpful personnel of the city's tourism department for making this report possible.