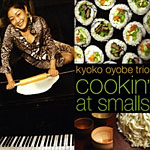 Kyoko Oyobe brings an eclectic presence to her music. As a composer, she finds inspiration in mainstream jazz to which she adds her own classical music perspective. As a pianist, she condenses her thoughts and then lays them out impressively. She does not lose her sense of place or time when doing so, and her instincts are strong enough to let the tunes flourish and make their presence felt.

When Oyobe moved to New York she established herself performing in several clubs, including Milton's Playhouse, 55 Bar, and Fat Cat. Another jazz club she has performed in is Small's, where she recorded Cookin' At Smalls with bassist Michael O'Brien and drummer Clifford Barbaro. The intimate setting of a trio works just fine; the three have a communicative rapport that gives each song creativity and depth.

The program is diverse, balancing up-tempo tunes with ballads. The mood is kept at a constantly high level of interest from the time it kicks off with "The Third Eye." It dances in on the edge of funk driven by the bass and drums, into which Oyobe steps in with a cascade of notes. The head plays around the melody before visiting it and giving it its succulent due. Oyobe is a fluid font of ideas, her emphatic chord work adding to the flavor. O'Brien gets an extended foray on the bass that he manifests with a textured presence that evolves into a conversation with Barbaro. Barbaro's accents and sense of time signal his attention to energizing the pulse.

Oyobe livens "The Fattest Cat in N.Y" with a welter of scintillating notes. Her sense of harmony and her two-handed attacks invigorate her path before O'Brien captures the moment with dizzying arco lines. "Asian Airs," with its Oriental tinge, is becoming. The pace is gentle, the melody has a soft glow, and the overall effect is quietly stunning.

This is a strong debut for Oyobe. She has the creativity to enhance her technique and in the greater scheme of things to take her art to a wider audience.

The Third Eye; Asian Airs; Spring Sky; The Brave One; My Pleasure!; Great Unknown; The Fattest Cat in N.Y.