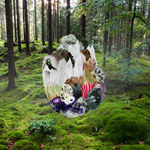 It's been four years since last hearing from Clogs, the quirky neoclassical quartet founded by Padma Newsome. This is the longest gap in the group's decade-long history, largely predicated when the Australian violinist/violist decides to come in from the Outback to reconvene with guitarist Bryce Dessner, bassoonist Rachael Elliott and percussionist Thomas Kozumplik, Americans all. The good news is that this inveterate group—often lumped in with groups like Rachel's and Bell Orchestre, with whom Clogs performed during its last tour in 2005, and for whom such comparisons are superficial, at best—is not only releasing its first full-length CD in March, 2010, but has whet the appetite with Veil Waltz. This 25-minute, digital-only EP makes clear that Clogs' overall aesthetic and voice remain intact; but there are changes.

While Newsome's voice has been part of Clogs' sonic toolkit since Lullaby for Sue (Brassland, 2003), it's never dominated. And so, perhaps, the biggest shift in the quartet's forthcoming song cycle, The Creatures in the Garden of Lady Walton (Brassland), is the preponderance of vocals— albeit coming, largely, from indie dream pop band My Brightest Diamond's Shara Worden, with single guest turns by Sufja Stevens, Newsome and Matt Berninger, singer in alt-rock band The National, with whom Dessner has been a member since inception. The largely instrumental Veil Waltz hints at what's to come with "On the Edge," the only track shared with the forthcoming CD. Worden's operatic soprano works particularly well within the song's appealing mélange of folkloric textures and minimalist pulses, while Elliott's lyrical bassoon and Kozumplik's spare percussion work in concert with Newsome's strings and Dessner's acoustic guitar to create the sublime beauty endemic in Clogs' work since its debut, Thom's Night Out (Brassland, 2001).

The rest of the disc, written by Newsome and Dessner, is culled from sources including soundtracks to Turn the River (2008) and Colony (2009). "Turn the River: Celeste Theme" opens the EP gently; a solo piece that assumes greater weight on "Turn the River: Mandola Theme," which introduces the entire group as Elliott's bassoon takes the lead, supported by Kozumplik's gentle percussion. Newsome's viola makes its first appearance, along with layered violin on the soft title track, a duet with Dessner on classical guitar.

The EP may be sourced from at least three separate dates, but hangs together as well as any of Clogs' previous albums. The group's ability to evoke timeless melancholy on the string-driven "Three-Two" and more sonically expansive "Colony Theme," which draws on the melody from "On the Edge" but in an entirely different harmonic context, is matched by its ability to mask greater compositional depth. Serenely beautiful, the mixed meters of "Guitar 13"—another duet between Newsome and Dessner—reveal far more detailed minds at work.

Building on the broader instrumentation of Lantern (Brassland, 2006), Veil Waltz announces that Clogs is back, and sets expectations high for The Creatures in the Garden of Lady Walton. Roll on March!