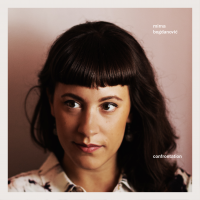 Arrestingly postmodern and warmly familiar in the same space, Mirna Bogdanovic's fourth release, Confrontation, stops just short of dismantling contemporary jazz and pop in favor of retaining those elements that tickle the memory's nostalgia receptors in such a way that the listener recognises the music as compelling, while at the same time not being able to explain why. This dichotomy represents a core intention of all art: the ability to evoke awe and confusion (manifested as sudden wonder). The Berlin-based singer composer communes with the creative spirits of her climes to produce music that is startlingly new yet easy to understand and enjoy.

Bogdanović's project begins as an electronic opium dream entitled, appropriately, "Melancholia." It is an anxious mashup of electronics, loops and synthesizers over a plaintive piano. Resolution is slow, evolving into a polyrhythmic dual between piano and bass, a prelude to the vocals. The product approximates something like if Peter Townsend was Samuel Taylor Coleridge, writing Tommy / Kublai Khan in the twenty-second century following a fever dream. It is a euphoric assault on the senses; intoxicating and nervously introspective. "June" emerges as a driven elemental rhythmic figure over which Bogdanović vocally dances with Wanja Slavin's saxophone, colliding with Povel Widestrand's multilevel keyboards, all driven by bassist Felix Henkelhausen and drummer Fabian Rösch .

Music defying description is exactly that. Bogdanović creates a tactile landscape with hard ridges and soft valleys, cloaked in a fog of scintillation. This music shimmers, multichromatic. She does this with layered voices barely covering a transformative quintet, creating alternate paradigms and universes. "Cold Lake" recalls deeply the tintinnabuli of Arvo Part, performed at eleven on a scale of ten. Multilayered and chaos complex, the piece represents a digital chorale. The single non-Bogdanović composition is Jaco Pastorius' "Rain." Undulating, the singer presents this as straight contemporary jazz pushing the stylistic envelope into the voice-heavy title piece (think the Andrews Sisters singing from the deck of the USS Enterprise). Confrontation is a drug...a potent one, but one safe for frequent consumption. This is art that asks, "What if?"