By John Sharpe
September 3, 2010
Sign in to view read count 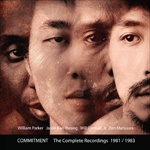 Following on from the artistic success of their splendid Muntu Box Set (2010), No Business Records has restored the only release by the ground-breaking cooperative Commitment to availability. As one of first bands to unite Asian American with African American musicians, the quartet, comprising Jason Kao Hwang on violin and Zen Matsuura on drums with reedman Will Connell Jr. and bassist William Parker, was almost unprecedented and its blending of cultures unique. What we have here is the 40-minute studio session from their lone eponymous LP supplemented by an almost 90-minute festival tape from Moers in Germany during the band's only trip to Europe, in 1983. Ed Hazell, again, contributes extensive sleeve notes which document and explicate the context in which the original appeared at the tail end of the loft jazz era.

This was the debut for the 23-year old Hwang who grows in prowess as an improvisor before your ears between performances, but was already a composer of note: his "Grassy Hills, The Sun" persists in his repertoire over 25 years on. Parker at that time was near ubiquitous in downtown Manhattan, when he wasn't on the road with pianist Cecil Taylor, and remains the most high profile alumnus. Connell and Matsuura have birthed more slender discographies, both before and since. After a stint in LA with pianist Horace Tapscott, the reedman moved to the Big Apple, but has continued relatively unsung, being best heard on Atmospheels (CIMP, 1999) a trio with trombonist Steve Swell. Matsuura has fared only slightly better, recording more often, most recently on trumpeter Roy Campbell's Akhenaten Suite (Aum Fidelity, 2007).

Unlike the archetypal loft jazz group, Commitment was never a blowing band, and it is the quality of the compositions, from across the band, as much as the ensuing extemporizations, which first give pause for reflection. Although Matsuura hails from Japan and Hwang was a first generation American of Chinese descent, few overt oriental influences come into play. Rather, as Hazell suggests in the liner notes, they are absorbed into the overall conception, only hazily sensed in the way Matsuura's percussive shading colors the ensembles or Hwang's awareness of space and asymmetry.

Surprisingly given the tendency for ballads to expose callowness, the slower pieces from the LP are consistently the most interesting. Connell's "Mountain Song" makes for an unconventional opening: an atmospheric rubato dirge for flute, violin and arco bass over cymbals and mallets, which gradually unfurls into separate but intertwining lines, while maintaining the predominant mood. Parker's "Famine" serves notice of the bassist's coming stature as composer by sidestepping the head-solo turns by everyone-head format more typical of the time. After a violin line palely reminiscent of the previous "The Web Of Forces," martial drums, bowed bass and long held bass clarinet tones create a drifting, almost nightmarish feel, as harsh textures ebb and flow. Everyone plays at once, building to a crescendo before a return to Hwang's acapella violin, plucking plaintively over droning bass clarinet and rattling drum.

But it is the violinist's "Grassy Hills, The Sun" which forms the centerpiece of the album. Following a distinctively flavored, stately violin/alto unison over tumbling drums and booming bass, Hwang eases into a mournful, sometimes desolate, extravaganza, distinguished by occasional vocalized leaps. Parker and Matsuura combine in a wonderful gnarled backing which uncovers odd rhythmic pockets which the soloist must vault. Similarly inspired, Connell rises to his most telling outing of the set: a brief searing sour-toned alto saxophone exhortation of tight understated anguish. Before the finale, Matsuura makes a finely judged percussion statement, retaining those pockets of silence, his resonant cymbals like prayer gongs and pounding toms evoking taiko drums.

With audience noise and conversation, the Moers Festival date sounds like a bootleg, but the music it contains more than justifies its inclusion. Once again there are no crowd pleasing riffs. This is substantive fare. On "Ocean" Hwang's austere intro gives way to a rippling flute excursion over a loping beat, before the violinist demonstrates his progress with bold use of slashing strokes to create dynamic contrast within his flowing lines. As the temperature cools they segue into the collective simmering stew of "The Pathway." Parker's "Continuous" again confounds expectations at least initially, beginning with a pair of duets: a serene communing between bass and reedy bass clarinet, then ominous plucked violin paired with quiet percussion, presaging a somber theme, before picking up momentum for extended individual features over a fast clip.

But again Hwang's "Grassy Hills" provides the highlight of the set, drawing a strange and disconcerting bleating false fingered outburst from Connell on alto saxophone, before a wailing group improv. Another Parker cut, the singing then driving "Whole Grain" constitutes the encore demanded by the raucously enthusiastic crowd. An overly bright sound at times makes the live session a demanding listen, but the light it shines on the band's development is invaluable. Sadly there were to be only a few more gigs before Commitment disbanded in 1984. It is to the credit of the No Business label that they are making such important music available, and with due care and consideration given as to how they can add value beyond a straight reissue.