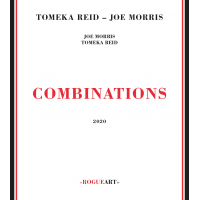 One of the fascinations of a duet is how the alternating tension and balance between the two poles can create an overall mood which differs from either of the constituent parts. Abstraction particularly promotes that sort of ambiguity, and it is especially prevalent in the pairing of cellist Tomeka Reid and guitarist Joe Morris on Combinations, who....er, combine on a program of ten cuts, which include three covers from the free jazz canon alongside unfettered inventions.

After a lengthy career which boasts stints in the bands of pianist Matthew Shipp and saxophonist David S. Ware, Morris has become an elder statesman on the avant-garde scene as well as an increasingly influential educator. Reid, more than 20 years his junior, has ever more spread her wings since emerging from Chicago's AACM, leading her own quartet on its eponymous debut (Thirsty Ear, 2015) and Old New (Cuneiform, 2020). Together they constitute half of the cooperative group Geometry, whose sophomore offering Geometry Of Distance (Relative Pitch, 2019) was recorded ten days after this date.

The prosaic ethos at work in naming the album also extends to titling many of the individual pieces. But while descriptive on one level, such functionality masks the magic contained therein. Liberated from the traditional roles of their instruments, the pair are able to indulge in exchanges of ideas and textures which suggest only the briefest confluence between two independent streams, yet remain fully cognizant of each other's trajectories, as can be heard on the lovely opener "Are You Ready?" and the explosive "Together Yet Always Apart." On some cuts they alter their sonic profiles with preparations, with Morris somehow evoking a gamelan orchestra on "Percussive Play," which follows its own a weird logic, to culminate in echoes of Balkan dance.

But what elevates the outing is the inclusion of the covers, two from AACM alumnus violinist Leroy Jenkins and one from violinist Billy Bang. It continues a trend of celebrating the history of the AACM, inaugurated by Reid, along with flautist Nicole Mitchell and drummer Mike Reed, on Artifacts (482 Music, 2015), and manifest elsewhere, notably her wonderful encounter with pianist Alexander Hawkins on Shards And Constellations (Intakt, 2020).

She and Morris handle all three pieces loosely enough that they fit in well with the rest of the set, while at the same time adding footholds of form amid the spontaneity. They take "Chicago" at an unhurried tempo, much more elegiac than the staccato original which, as the longest track on the disc, allows ample room for cavorting digression. With bow in hand, Reid leads the line on "New York" drawing out the pathos from the tune. Bang's "Rainbow Gladiator" ends the disc with a joyous swing, which even finds Reid emulating slap bass as Morris extemporizes.

Are You Ready?; Chicago; Together Yet Always Apart; Parallax Strolls; Percussive Play; New York; In The Mid Ground; Talking Drums; Skim The Surface And Plunge The Depths; Rainbow Gladiator.