As much as many artists have a clear idea of where they are and where they're going, there's no denying the value of a strong producer. Colin Vallon's first two trio discs—2004's Les Ombres, on the small Swiss NotsiNOISY label, and 2007's Ailleurs, on the more widely distributed Hatology label—both demonstrated plenty of promise, albeit in contexts where it seemed as though the young Swiss pianist was like a kid in a stylistic candy store. Vallon's classical background clearly informed the music, but so, too, did an allegiance to the American tradition, through Paul Bley and, in particular, Keith Jarrett's American Quartet of the mid-1970s, with plenty of freedom thrown into the mix. What elevates Rruga, the now 30 year-old pianist's debut on the even more venerable ECM label, is its clearer sense of focus and direction, two characteristics that producer Manfred Eicher has brought to hundred of jazz sessions over the last four decades.

Not that Vallon and his trio—which includes percussionist Samuel Rohrer, familiar to ECM fans for his work on pianist Wolfert Brederode's Currents (2008) and their work with singer Susanne Abbuehl on her label debut, the stunning April (2001)—are lacking in direction, but their first recording for ECM has a greater sense of unity, a more consolidated voice that also speaks to the trio's greater longevity, with Rruga reuniting the same lineup as on Ailleurs, also featuring bassist Patrice Moret, a participant on reed man Domenic Landolf's similarly empathic New Brighton (Pirouet, 2010).

The greater unity of Rruga is all the more curious for its fundamental shift in compositional input. Vallon remains its titular leader, but Rruga is the first to introduce writing from his trio mates. Rohrer contributes three tunes: "Polygonia," where a brooding intro leads to a moment of absolute silence, the trio emerging, like soft rays of sunshine with a stronger allegiance to time, and Vallon and Moret equal thematic partners; the simmering "Noreia," its gentle song form and intrinsic lyricism driven by a pulse from Vallon's left hand and Rohrer's consummate balance of timbre and tempo; and the closing "Epilog," with Moret's softly spoken bass intro foreshadowing its melancholy melody, dark-hewn by Vallon's languid but note-perfect performance.

Playing what the music demands—nothing more, and nothing less—seems to be a defining marker for Vallon and his trio. Moret's two contributions—the slow, repetitive build of the opening "Telepathy," and the sparer "Fjord," where slow arpeggios from Vallon are injected with occasional unison punctuations from the pianist and Moret—are open-ended, to be sure, but rely on the inherent chemistry of the trio for their dramatic arcs. And while "Iskar" is a group improvisation, it's not without a basis—Stefan Mutafchiev's folk song, "Shope Shope," though it's unlikely the Bulgarian would ever have envisioned Rohrer's small tuned gongs and deliberate but largely suggestive pulse, or Vallon's ability to gradually unveil a brief window of form, before dissolving, once more, into ethereality, coupled with Moret's sweeping, harmonic arco. 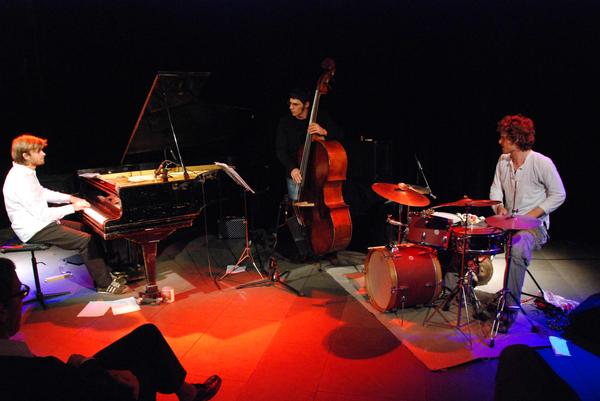 Vallon's title track—and its later variation—ebb and flow with a series of changes; materializing with dynamic movement, but avoiding the melodrama towards which such elemental melodism often leads in lesser hands. "Eyjayjallajökull" is an exercise in stasis, free expression and tonal experimentation, while "Meral" is more direct, though never approaching obvious virtuosity; instead, it's in Vallon's chiming outro, that it becomes clear how he, along with his trio mates, places greater emphasis on exploration of sound and service of song, rather than any kind of coarse, overt impression.

ECM has always held a special place for the piano trio, and its rich catalogue has successfully managed to avoid the trappings that stifle so many of this staple jazz format. Instead, its roster—the past twelve months seeing compelling and unmistakably different titles from Julia Hulsmann, Anat Fort and Marcin Wasilewski—continues to find new nooks and crannies to explore, adventuresome explorations of a format that, for some, has become tired and staid, but here remains as vital and forward-looking as ever. With Rruga, Vallon and his trio joins an elite group of piano trios that, despite a clear reverence for what has come before, focus more decidedly on what's to come.