By Henk de Boer
April 10, 2015
Sign in to view read count
Although Adolphe Sax actually invented the saxophone, in the jazz world the title "Father of the Tenor Saxophone" became justly associated with Coleman Hawkins (1904-1969), not only an inventive jazz giant but also the founder of a whole dynasty of saxophone players. Before Hawkins, the saxophone (itself "born" in 1846) was mainly a favorite in marching bands and something of a novelty instrument in circus acts and vaudeville shows. Indeed, at age 16, Coleman started out with such a vaudeville group, Mamie Smith and her Jazz Hounds.

Even at 16 he garnered admiration for his ability to sight read and impressive musicianship. He started with the C-melody sax, which he soon traded for the more robust tenor, while also doubling on clarinet, baritone and even bass saxophone. Much more important was his 1923 engagement with the then famous Fletcher Henderson Band, of which also Louis Armstrong became a member (there is little doubt that Hawkins became influenced by his playing style). Here his talent ripened and ultimately grew too big for the somewhat stagnating opportunities the band offered him.

In 1933, Hawkins left Henderson to sail to England where he had a stint with the celebrated Jack Hylton Orchestra. For five years he toured the continent and more or less settled in Holland. Everywhere he played he was met with great enthusiasm, but for himself this was foremost a period of consolidation and further ripening. In 1939, he returned to the US and in that same year made an everlasting impression with his tender masterpiece "Body and Soul." "The Hawk" was fully back on the scene and maintained his grip until shortly before his untimely death in 1969.

Hawkins' personality and attitude were competitive and at times aggressive. He welcomed any opportunity to duel with other horn players, like his famous 1939 contest with his main opponent, Lester Young. Always aspiring to win, his playing was full of drive and rarely relaxed. Still, he made harmonious records with Benny Carter, Ben Webster and especially trumpeter Roy Eldridge. Due to his unique ability to adapt his playing style to new musical concepts, he made smooth transitions into bebop and cool jazz in the '40s, resulting in a comfortable collaboration with younger jazz pioneers. 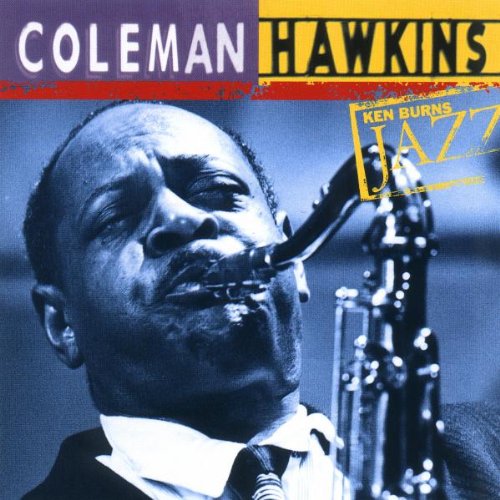 This compilation is a spin-off of the PBS production Ken Burns Jazz. It highlights nineteen significant recordings from "The Stampede" with the Fletcher Henderson Orchestra in 1926 to his 1962 date with Ellington and as such represents an excellent overview for first timers. 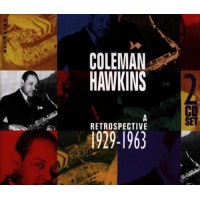 Extensive 2 CD overview: 34 years of Hawkins' recordings for the Victor associated labels. This includes the early classics "One Hour" and "Hello Lola" with Red McKenzie on comb as well as the whole original 1939 session that originated "Body and Soul" up to the sixties. 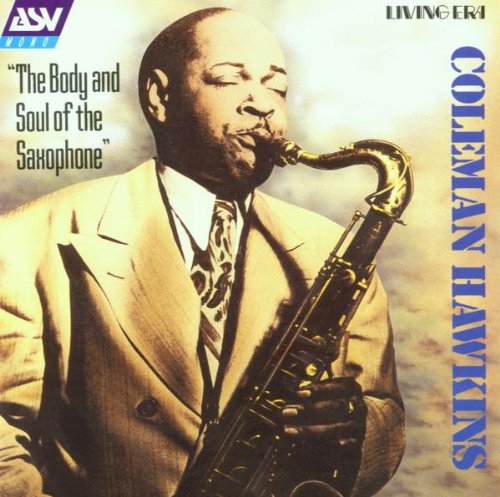 Coleman Hawkins
The Body and Soul of the Saxophone
(ASV 2000)

A sound overview from 1929 to 1948 in 23 characteristic pieces on one CD, ranging from the early McKenzie recordings and "Body and Soul" to the renowned solo piece "Picasso." 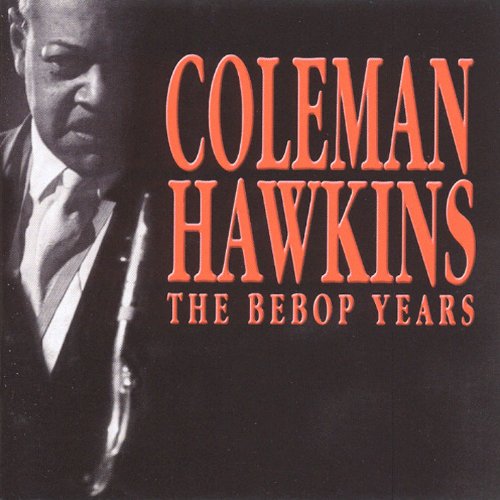 This affordable 4 CD-box covers the relevant 10-year period starting with "Body and Soul" in 1939. with 88 wonderful treasures in all. Four outstanding Commodore recordings with the Chocolate Dandies, with Benny Carter and Roy Eldridge, are remarkable. It also includes the roller coaster quartet pieces "The Man I Love," "Sweet Lorraine" and "Crazy Rhythm," and several swingers from the collection.

The Hawk made some classic recordings in the mid-1930s with French sidemen like Django Reinhardt and Stephane Grappelli and some also with alto player/arranger Benny Carter. "Honeysuckle Rose" and "Crazy Rhythm" became famous. The additional takes of Carter's orchestra are a nice bonus. 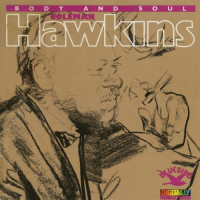 This CD not only includes the four historic 1939 recordings at Kelly's Stables, a 1940 octet date with associates from his Henderson days and completely different settings in 1947 with bebop sidemen Fats Navarro, J.J. Johnson, Hank Jones and Max Roach. 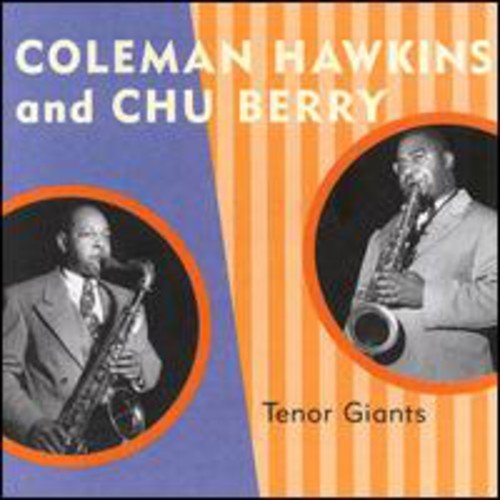 Interesting to compare the master and his most devoted follower on this Feather/Gabler mix. Includes six fine pieces of Hawk and Eldridge with The Chocolate Dandies. Chu Berry's performance of "Body and Soul" may well have influenced Hawkins' famous recording the following year. 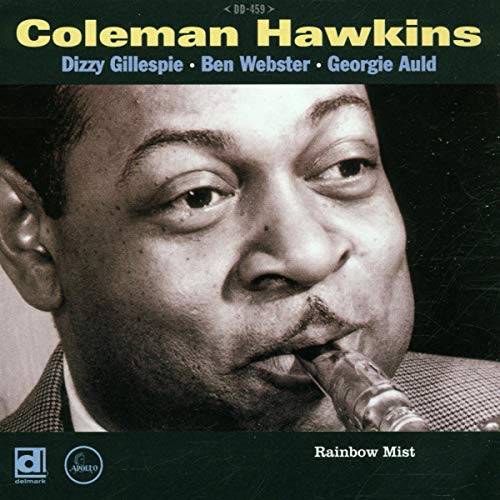 Marvelous and very swinging collection with Dizzie Gillespie, Oscar Pettiford and Max Roach, with a beautiful new treatment of" "Body and Soul," here renamed into "Rainbow Mist," plus some fine sessions with fellow tenorists Ben Webster and Georgie Auld.

Coleman Hawkins and renowed trumpet player Roy Eldridge ("Little Jazz") enjoyed working together, like they do here while touring with Norman Granz' Jazz at the Philharmonic in the 50's and at festivals like the famous one in Newport '59. Great listening. 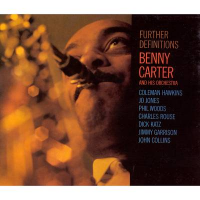 Beautiful four-sax arrangements of Benny Carter for Hawkins and Charlie Rouse on tenor and Carter and Phil Woods on alto, including remakes of the classics "Honeysuckle Rose" and "Crazy Rhythm" from their 1937 Paris sessions. Hawkins is his own exuberant self and plays a strong and moving version of "Body and Soul." 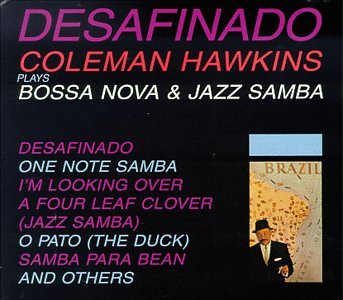 During the bossa nova craze Hawkins, forever defiant and then some, tackled the usual samba material as well as corny tunes like "I'm Looking Over a Four Leaf Clover" and succeeded in turning them into real swingers. 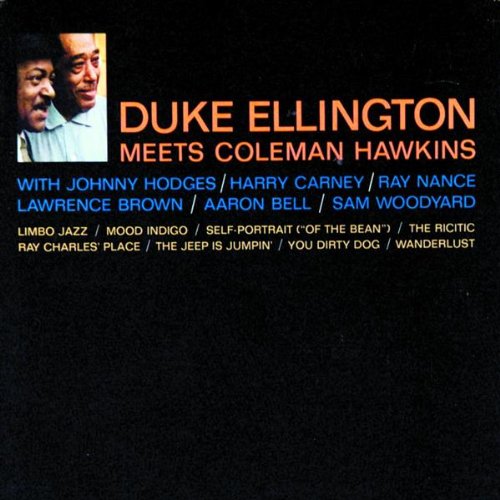 When two masters like this meet at long last then it is bound to be magical. They're all great Ellington compositions, but listen especially to a majestic "Mood Indigo" and "Self Portrait (of the Bean)." There is also a lot of synergy between Hawkins and Johnny Hodges.