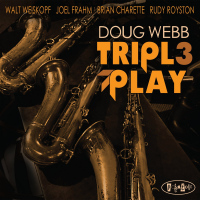 As tempting as it is to simply consign a blowing session label to Triple Play, a three tenor saxophone plus rhythm date led by Doug Webb, there's ample evidence that something more disciplined and structured is afoot. For one thing, eight of the disc's eleven tracks are under six minutes—in other words, there's not a lot of room for indulgence, excess, or one-upmanship of any kind. The material, including striking originals by the leader, Walt Weiskopf, and Joel Frahm, as well as assorted standards such as "Avalon," "Giant Steps," and "I Concentrate On You," is often tendered by the horns like a reed section of a big band, carefully blended and precisely executed. Randy Aldcroft, who doesn't appear on the record, is credited with the arrangements of three selections.

Organist Brian Charette serves as the session's ballast, holding things in place with smart, pulsating work on the bass pedals, beautifully shaded and nuanced comping, as well as tweaking soloists with the occasional brash chord. Rudy Royston's drums and cymbals constitute the session's wild card. He offers a busy, sometimes manic commentary, moving in and out of the pocket at will, punching holes in the music with his bass and snare drums, playing stretches of comparatively straight time, as well as tapping out jumbles of strokes.

Webb, Weiskopf, and Frahm are middle-aged veterans of the struggles and triumphs of jazz performance, far too accomplished and certain of their abilities to participate in some sort of spurious tenor battle; thankfully, the record's end result is a wealth of inspired, highly focused improvisations. The three tenors—each in his own manner—play with a ruthless efficiency, making complete, rousing statements, usually in just a handful of choruses, on selections mostly taken at middling to up tempos.

Webb possesses an exemplary ability to navigate various tempos and find fresh perspectives on material that would induce a litany of clichés in a lesser player. Undaunted by the dizzying pace of "Avalon," his ideas cohere without a trace of athleticism or strain. A three-chorus turn on Lou Donaldson's soul-jazz tune "Alligator Boogaloo" includes relaxed, neatly sculpted phrases as well as the requisite blues and R & B effusions. Throughout "I Concentrate On You," amidst Charette's and Royston's firm support, he swings in a way that evinces a momentum of its own. During the first chorus of his composition "Jones," Webb makes an art of stopping short, that is cutting off ideas before an easily anticipated conclusion, and then offering something else, without any hint of disengagement or loss of continuity.

It's easy to become preoccupied with Weiskopf's tone, a dense, vibrating, all-encompassing, blues-fused concoction, at the expense of taking notice of the ways in which he organizes ideas in the service of sustaining momentum. On his composition "Three's A Crowd" and Webb's "Triple Play," he displays a flair for brief, dramatic entrances—such as slamming home one note and extending it, or making a handful of notes sound like a buzz saw, immediately following with an impassioned, metallic cry—and then rapidly getting down to the business of building a cogent, emotionally compelling improvisation. The second chorus on "The Way Things Are," another one of his compositions, includes some of Weiskopf's most stunning work on the record. His lines are taut, tightly connected, and for the most part etched into the hum and rumble of Charette's bass line. When he pauses, or briefly spins out a flurry of notes that fly against the beat before snapping back to attention, the effect is like an edifice being ripped apart and immediately—miraculously—put back into place.

Each of Frahm's solos is something of an adventure, as he manipulates his tone, juggles contrasting rhythms, intentionally rushes or drags time, changes temperament from cool to hot, and flashes a number of ideas in relatively short periods. His "Jones" improvisation gradually comes into focus. Frahm lays back for much of the first chorus, playing a little behind the beat and leaving some room between selected phrases. The last eight bars signal a change as his tone assumes a ragged edge. The second chorus begins with the insistent pecking of a number of staccato notes, which he rapidly wrestles into a nifty phrase. Eventually his sound thickens and he integrates squeaks, burr tones, and screams. During "Your Place Or Mine" Frahm evokes jazz of the swing era for about a half chorus in terms of vocabulary and rhythmic nuisances before metamorphosing to the present day. Throughout "Triple Play" he creates tension by playing slightly ahead of the beat, and sprinkles at least three song quotes into the solo's second chorus.

Not unlike Swing Shift, Webb's memorable 2012 release on Posi-Tone, Triple Play contains the present centered vibe of the last set of a club date, when the musicians are open to all possibilities, expressing themselves without inhibitions and, for an hour or so, the sounds are strong enough to keep the outside world at bay.

Jones; Three's A Crowd; Giant Steps; The Way Things Are; Avalon; Jazz Car; Your Place Or Mine; I Concentrate On You; Pail Blues; Alligator Boogaloo; Triple Play.