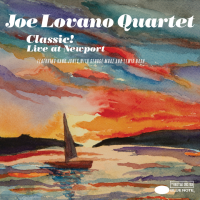 It's safe to say that many years from now, when the critics and historians have the benefit of distance to help focus their thoughts, many if not most will continue to hail much of saxophonist Joe Lovano's presently-admired body of work on the Blue Note imprint. But what will stand tallest in said discography? Some may continue to laud the bold, rhythmically charged work of his Us Five quintet; others may celebrate his fascinating Trio Fascination outings; and a different faction may extol the virtues of his commanding quartet dates recorded at the hallowed Village Vanguard. There's no shortage of good options in a portfolio that contains more than two dozen offerings and spans more than a quarter century.

For this writer, it will always be the recordings that Lovano created with pianist Hank Jones—amaranthine beauties that never seem to lose their luster. I'm All For You (Blue Note, 2004) and Joyous Encounter (Blue Note, 2005)—incredibly engaging quartet dates with bassist George Mraz and drummer Paul Motian rounding out the lineup—came first, and in quick succession; the pair's lone duo date—Kids: Live at Dizzy's Club Coca- Cola (Blue Note, 2007)—came a little later. Jones passed away a few years after that third record arrived—in 2010, at the ripe young age of ninety-one— and Lovano moved on to other musical realms, seemingly closing that incredibly fruitful chapter of his artistic life. But now the story comes alive again with the release of this set that was captured live at the Newport Jazz Festival in 2005.

ADVERTISEMENT
After recording Joyous Encounter in May of that year, Lovano toured Europe with the quartet from the album, with model-of-class drummer Lewis Nash replacing Motian. That band coalesced into a communicative marvel, a fact that's clear as day here as those four musicians put forth integration and integrity as their collective calling cards. Subtle and artful shifts from flowering ballad territory to solid state swing help to elevate Lovano's "I'm All For You"; bluesy, raucous, cool, and gritty sounds mix perfectly together to make for an easy sell of Oliver Nelson's swinging "Six And Four"; and empathy knows no bounds on the Brazilian-inflected "Don't Ever Leave Me." Oh, to have been in the audience on that summer day.

While the magic exhibited here is of a similar sort to what can be heard on the aforementioned quartet recordings, it's obviously not the same. And it should come as no surprise that the change in the drum chair is what altered the chemistry of the group. Motian was a master of percussive shading, allowing airiness into an instrumental realm that it rarely entered, and Nash typically prefers things on the taut and tidier side. The mind was pulled deep into a dream when Motian joined forces with Lovano, Jones, and Mraz, but hearing Nash with the same three is another experience entirely. He pulls the whole body of the listener into the music. If your foot isn't tapping, your body isn't moving, and your head isn't bobbing along in the affirmative during "Kids Are Pretty People," you may be suffering from some form of paralysis. Nash once released an album called Rhythm Is My Business (Evidence, 1993), and he wasn't kidding.

Bestowing an album with the "classic" designation upon its release may seem a bit presumptuous, but this appears to be one of those if-the-shoe-fits cases that says otherwise. A classic, by its own definition, is something "of the first or highest quality, class, or rank," and this surely fits the bill.

Big Ben; Bird's Eye View; Don't Ever Leave Me; I'm All For You; Kids Are Pretty People; Six And Four.