BY KARL ACKERMANN
July 8, 2016
Sign in to view read count 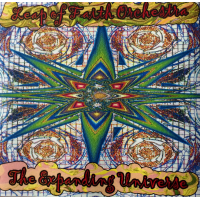 The creative music cooperative known as Leap of Faith had a long initial run from 1993 to 2001 and then re-booted in 2015. At their core, from the beginning, have been multi-instrumentalists David Peck (aka PEK) and Glynis Lomon. PEK, however, assumes a more than democratic leadership role across the many manifestations of the collective that live on his Evil Clown label. On The Expanding Universe the Leap of Faith Orchestra—true the album title—escalates with full (but non-conventional) ensemble of fifteen.

At fifty-thousand feet, one could describe the overall vibe of The Expanding Universe as running the gamut from melodic to shambolic. The latter perception may be driven by the presence of more than four-dozen instruments/devices in the hands of these fifteen artists. The sole track (being the title track) is a sprawling epic at seventy-seven minutes and does indeed deviate between the austere and the chaotic, but as always, composer PEK has a higher purpose. Swerving whistles and a siren usher in the piece with no small amount of urgency building to a crescendo of noise before a lone tuba replaces near-calamity with dark mystery. Later, piano and alternate devices struggle for dominance, lopsided melodies collide with bells, blocks and cymbals in a musical representation of the album's stated theme.

PEK and the Leap of Faith Orchestra collectively have the gift of being able to discover music where it lives and one would be justified in believing that they could find aesthetic value in the rhythm of windshield wipers as certainly as with a saxophone. The Expanding Universe only marginally revolves around recognizable spheres like the bass, vibes or cello. There are nebulas of boomwhakers, fog horns, sirens and pieces of metal attracted by the gravitational pull. Like any uncharted exploration, attention to detail makes this experimental journey a memorable experience.