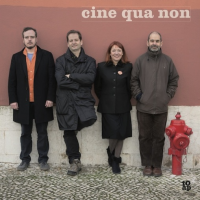 Sine qua non is a Latin term meaning something absolutely needed, or essential. This Portuguese quartet is exactly that in terms of bringing melody and accessibility back to the fore in European jazz. However, their name is mis-spelt because accordionist Joao Paulo Esteves da Silva says their music "alludes to the cinema."

With his instrument lending a very French, nostalgic feel to the proceedings, the movie seems to be set in Paris. Jean Gabin and Michele Morgan play ill-starred lovers and Morgan wears a white raincoat just like the one she wore in Quai des Brumes back in 1938.

That said, the title of the opening number, "Encontros Nao Imediatos (Not So Close Encounters)," does have a definite sci-fi ring to it. A case of Chaqu'un à son movie , or as da Silva puts it, "Each listener free to imagine his or her film."

Cine Qua Non have taken flak in their homeland for producing what one po-faced critic has called "a light music... lacking melodic personality." This is to miss the point for, within what he castigates as the "very comfortable and predictable melodies," some great things are happening, largely thanks to pianist Paula Sousa.

In 2002 this immensely talented woman, classically trained, heeded the call of jazz and sold her house in Porto to take a course at Boston's Berklee College of Music, graduating in 2004, around the time of her 50th birthday. She can't understand friends of a similar age who tell her they are looking forward to retirement. "I want to play until the end of my days," she says.

She produces great solos in the aforementioned " Encontros Nao Imediatos" and the number that follows it, "As Nuvens Passam (The Clouds Go By)," which was penned by bassist Mario Franco.

"Este Choro É Meu Pranto" is a Brazilian song by Claudionor Cruz, who died in 1995. Choro means "cry" or "lament" but—typical of the genre—the number is fast and happy.

Similarly, guitarist Afonso Pais' "Dos Ultimos Dias (The Last Days)," while less up-tempo than its predecessor, is by no means as doomy as its title implies and da Silva's " Certeza (Certainty)," is a rollicking tribute to optimism and a timely, closing reminder that modern music doesn't have to be hard to listen to and academically experimental to be good.