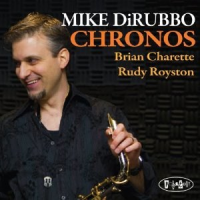 Piano has always been part of the package on saxophonist Mike DiRubbo's albums. Still, when DiRubbo made his Posi-Tone debut with Repercussion in 2009, he left the piano behind, relying instead on some harmonic underpinnings from vibraphonist Steve Nelson. Now, on his follow-up disc for the label, he moves into different piano-less territory with his first organ trio record.

DiRubbo digs in on these nine original tracks, which shy away from organ group stereotypes. DiRubbo penned two-thirds of this material, with organist Brian Charette providing the other three tracks, and the majority of the songs lean heavily on their rhythmic foundations. The album opener, "Minor Progress," contains all sorts of stop time breaks and unison hits from the rhythm duo, while DiRubbo works his craft on top. Charette's organ works against the beat in certain places, obscuring the time a bit, but the up-tempo swing eventually takes over. Two Mike DiRubbo's, through the magic of overdubbing, work together at the outset of the title track, and this piece deals with tension and release, as the rhythm section moves in and out of a swing groove.

DiRubbo's agile mind and audacious ideas come to the fore on "Ritual," an odd-metered funk tune in seven (with 6+8 subdivisions) that's built off looping licks and grooves from Charette and drummer Rudy Royston. While the mid-album "Nouveau" and "Lucky 13" are the least memorable performances here, the last three tracks are all winners: Charette's "Excellent Taste" lives up to its name and features some gorgeous saxophone work from DiRubbo, while "Eight For Elvin"—whether earning its name from its placement in the running order or from the eight-bar, polyrhythmic, Elvin Jones-like drum solo sandwiched in the middle of the head—never disappoints. Despite the fact that DiRubbo doesn't wield a tenor saxophone, the drum-saxophone dialog on this one seems to be a clear nod toward the John Coltrane-Elvin Jones connection. Charette's album closer, "More Physical," is playful at first. A slight tropical tinge, light and frothy sounds and looping ideas that establish the 7/4 groove are all in play, but things eventually turn physical when Royston starts bashing away toward the back end of the track.

Chronos—viewed as the personification of time in Greek Mythology—is an apt reference point for this rhythmically vital set of music from saxophone scion Mike DiRubbo.