By MIKE JURKOVIC
November 21, 2018
Sign in to view read count 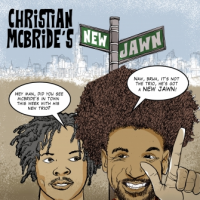 It's true that six-time Grammy winner Christian McBride hasn't been the new thing on the scene for some time now. Yet the gritty Christian McBride's New Jawn pops from the get-go with a zesty, youthful intensity and infectious enthusiasm. making his lifelong inquiry into jazz past, present and future a pure joy to listen to.

On his first release for his Brother Mister Productions, a new imprint from his longtime label Mack Avenue Records, McBride turns away from the usual trio/quartet/quintet/big band permutations that tickle his mischievous muse, leading a high-flying, piano and chord-less posse of Jackie McLean protege, trumpeter Josh Evans, the saxophone cool of Marcus Strickland and drummer Nasheet Waits through an unapologetic reverie of free groove and fiery ensemble acrobatics.

First the boozy woozy wandering of "Walking Funny" lopes into existence, blowing out the blueprint on how most of the nine frenetic creations are going to soar: McBride and Waits will offer opening statements and from there the sky's the limit. "Ke-Kelli" swells into action from McBride's stuttery, full-bodied bowing as Waits enters with his own percussive tide. A brief horn fanfare introduces a whole new racing, rhythmic slant as Evans blares and shards, handing off to Strickland then back again until somewhere around the 5:30 mark when the whole heads south to Frenchmen Street and more than cooly second lines out of town.

Cut from the same impulsive and propulsive cloth, "Middle Man," "Pier One Import," and "Sightseeing" (Evans is pure invention here) are prime, cutting examples of the pulse racing, percolating, sparring, neo-bop, funk 'n blues swingers that marked McBride 'maverick' and 'the new thing' back at his '90s starting line. And by surrounding himself with like-minded, improvisatory maestros, the music continues to burst forth.