BY DAVID A. ORTHMANN
November 21, 2018
Sign in to view read count
Track review of "Pearls" 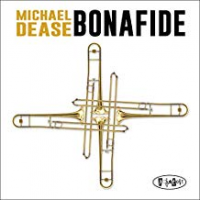 Listening critically to recently produced mainstream-jazz recordings often feels like prospecting for gold amidst the dross of familiar templates, all-too-common stylistic references, and unremarkable performances. However, occasionally, even when a record doesn't hang together particularly well and is likely to disappear under the weight of scores of similar sounding releases, diligence is rewarded by a track that stands out and demands to be taken seriously.

"Pearls" is the piece de resistance of trombonist/composer Michael Dease's Bonafide, an otherwise competent recording. From start to finish the track is one, big, five-minute blast of energy and ingenuity. The compactness of four voices—Dease, pianist David Hazeltine, bassist Todd Coolman, and drummer E.J. Strickland—speaking freely at the same time makes the bop derived footing sound risky and daring. The band exudes joyous abandon and mutual respect. They're as close as they can be without stepping on each other's toes or making a mess of things. Dease and company think fast, react without hesitation and keep driving forward. And the music is no less clear, purposive or certain for being filled to the brim.

David Hazeltine's composition is catchy, tightly wound and feverish. An up-tempo amalgam of vaguely familiar phrases, it slips, slides, dances, and feints, yet always lands on its feet. The pianist's contributions make the difference between an interesting track and a memorable one. During the head, while Dease offers a straightforward take on the melody, Hazeltine circles and surrounds him, slapping down scraps of the tune in sparkling single notes and smartly voiced chords. A live wire, savvy accompanist, Hazeltine gives the impression of being everywhere at once, simultaneously goosing Dease, plugging the song, and interjecting spontaneous remarks. Near the beginning of Dease's meaty solo, he jumps in and blithely extends one of the trombonist's phrases; a few seconds later, they miraculously land together in a brief unison passage. Still, there's enough open space to hear the impact of Coolman's resolute bass line and Strickland's thickset snare accents.

Perhaps the most impressive, unifying ingredient of "Pearls" is the way in which the melody appears, sometimes whole, sometimes in partial, irregular forms, throughout most of the track. Hazeltine issues reminders while comping amid Dease's solo, and Strickland takes cues from and deftly improvises around bits and pieces the band throws at him. These instances circumvent a predictable, commonplace head/solos/head quality and make a large contribution to a complete, richly rewarding performance.