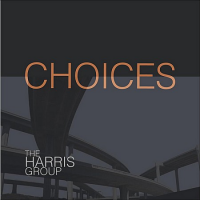 Issues of health are a fact we will all deal with at some point in life, though the nature of a particular affliction may, for some, affect their lives, derail dreams and change their journey. For Chicago-based guitarist Ric Harris, a battle with a seizure disorder that began in his youth led to brain surgery thirty years later and forced him to make personal choices that would change the course of his life. Memory loss and the need to relearn the basics led him to one of his first choices; giving up music. Drawing upon strength, courage and resolve to move on, Harris marks his professional return to music after a ten-year hiatus, with a debut album appropriately titled Choices.

Harris fronts a formidable quartet that notably includes young vibraphonist Micah Rutschman mixing it up on lead lines with the guitarist and also features veteran saxophonist Chris Greene as guest on a couple of tracks. The Harris Group delivers an engaging sound, ably interpreting both covers and fresh new material from the leader's songbook. The opening title track is one of the first compositions Harris worked on as he began to engineer his comeback and, like "Paula's Waltz" (inspired by his wife) and "Cape Hatteras," is a light, melody-driven tune with a lively, uplifting feel.

The most challenging composition of the disc is "Across the Divide," where Harris incorporates phrases from Horace Silver's classic "Nica's Dream" and Jerome Brainin's "The Night Has A Thousand Eyes." Other originals of note include "Russell Square," "Chances Are" and "Around the Block." There are a select few standards included here too, of which Herbie Hancock's "Dolphin Dance" is a perfect choice to showcase Harris' renewed skills on the guitar due to its simplistic melody and is well accompanied by Rutschman's marvelous work on the vibes.

Another mellow spot on the disc comes as Harris borrows from the Billy Strayhorn songbook, presenting a soft rendition of "Isfahan" featuring Greene on the first of two forays on soprano. Harris closes with a highlight of the album—a stellar rendition of Wayne Shorter's "Footprints," which includes some of the guitarist's best riff work. Harris is experienced at making hard personal choices and this debut is impressive and significant on many fronts. Choices is a musical triumph owing to the selection of material, the collection of first-rate players and the fine musicianship demonstrated by all. Choices is a testament to the successful choices Harris has made and affirms that he is certainly back for good.