By KARL ACKERMANN
June 9, 2016
Sign in to view read count 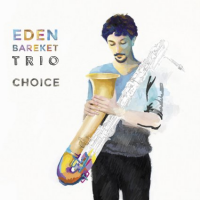 Buenos Aires native and baritone saxophonist Eden Bareket is new to the New York jazz scene but demand has been growing for his presence as a sideman. Having played with the Ari Hoenig Nonet, he has worked prestigious venues including Carnegie Hall, Kennedy Center, and Jazz at Lincoln Center. Choice is his debut recording with, Or Bareket, on bass and Felix Lecaros on drums.

Or Bareket was the first prize winner at the International Society of Bassists' jazz competition in 2011 and his improvisational approach is influenced by numerous global musical styles. Lecaros is from three generations of Chilean musicians dating back over one-hundred years and with over twenty professional musicians in its ranks.

"Jenga" opens the set with high-energy free improvisation where Bareket's baritone manages to be both accessible and adventurous. The moody opening of "Raccoon" adapts to a subdued Middle Eastern essence and closes with an air of mystery. "The Last One" and the title track are darker and bluesy with a bit of an emotional sax outburst midway on "Choice." "Diphthong" flawlessly moves from a languid impressionistic theme to an inventive post-bop romp. Peter Gabriel's "Don't Give Up" exits on a strong, upbeat note, uncharacteristic of the original. In Bareket's interpretation, this reimagining of the piece works well.

Bareket's composing and playing are impressive and his selection of material for Choice is a good mix for demonstrating his skills. He uses the full capability of the baritone, sounding a range that approximates everything from bass clarinet, to tenor sax to the low deep rumbling most often associated with the instrument. What this group—and Bareket in particular—lack in a current portfolio, is more than made up for with the promise of this outstanding debut.

Jenga; Raccoon; Choice; Unfinished Business; Arguing with Myself; The Last One; Camel; Diphthong; Don’t Give Up.